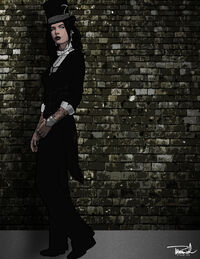 The daughter of John Zatara, Zatanna is a powerful magician who uses her backwards-speaking spells as both a stage performer and a member of the Justice League.

Occultist: as Chronicler of Magic she possesses an extensive understanding of Occult lore due to her Mystic Background

As a magician, she is considered among the most powerful and knowledgeable in the world and often works alongside the most powerful magic-users on Earth, including Doctor Fate, Madame Xanadu, and Captain Marvel. However, the actual extent of her powers is not fully known. According to Green Arrow, she is the most powerful member of the Justice League. Of all the magicians and sorcerers on the planet, the JLA always go to Zatanna when they need magical assistance.

Mnemonic Incantation: Zatanna casts her spells by saying the words of her incantations backwards. Zatanna must concentrate on her magic to make sure she is using the proper spell. It is at this point where she is most vulnerable. Mnemonic incantation is the most complicated of the mystic arts. It appears that this is well known to her enemies. On one occasion, the assassin Slade Wilson delivered a direct blow to her liver, initiating a regurgitation reaction. On a separate occasion, The Joker (disguised as the stage magician Loxias) shot Zatanna in the neck, rendering her magic useless. She must be able to speak or read backwards in order for her to focus her spells.

Equipment: Magic Wand: Often seen with a magic wand, although whether it is a stage prop or an actual focus for her powers remains unknown. She doesn't need it though, considering her recent appearances without one and being able to cast spells effectively.
Transportation: Teleportation, Flight
Weapons: None known.

Retrieved from "https://dcfanfiction.fandom.com/wiki/Zatanna_Zatara_(Earth-X0)?oldid=31013"
Community content is available under CC-BY-SA unless otherwise noted.