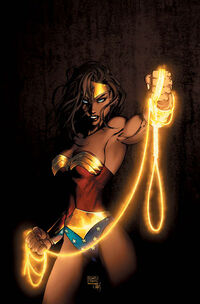 Superhuman Strength: Granted by Demeter (Goddess of the Earth). Diana is literally as strong as the Earth because of her link to the planet granted to her by Demeter. She is said to be 'stronger than Hercules'. It is obvious her strength is magical in nature, given her height and weight. Wonder Woman is known to be one of the strongest beings in the DCU, often shown to be in the same class as Superman himself and to physically over-match other beings such as Supergirl without too much effort. She is considered to be the strongest superheroine in the world. After Superman, she is the strongest superhero in the DCU. She has godlike strength and also invulnerability due to her aegis-made shield magic bracelets. With her superhuman strength and superior fighting abilities, she has proven to be able to take on any other member of the Justice League in combat. In the events of Justice League: League of One, she was able to defeat even the other six main members through a combination of planning and power in order to save their lives and the world. She is strong enough to lift weights well into the megaton range and even pull 1/3 of the earth.

Superhuman Durability: Granted by Demeter (Goddess of the Earth). Diana, possesses a high resistance to damage and magical attacks. Her resistance to injury is not quite as great as any of the above mentioned metahumans. However, due to her vast threshold for pain and her amazon ability to heal at a superhuman rate, this easily makes up for the difference. She has withstood considerable bludgeoning damage in the form of hand to hand combat with metahuman opponents such as Superman and Captain Marvel. She has considerable resistance to human weaponries,though this is not absolute; Bullets can cause minor to moderate injury, but never life threatening. And her ability to heal rapidly, makes up for this set back. She can easily survive under extreme pressures, cold, and heat. Wonder Woman has been able to traverse space, undergo submergence into lava, and withstand a direct explosion from a nuclear warhead unharmed. Born of the clay of Themyscira, and given life and divine powers by the gods themselves, Diana has heightened resistance to magical attacks. She is highly experienced in battling foes who use sorcery as a weapon. As a divine creation herself, she is far-less susceptible to manipulation by magic and mental attack than many of her fellow heroes. Also, Wonder Woman is self-sufficient in that she doesn't have to eat and can go without sleep. She is also capable of holding her breath under water, for hours and hours on end. She did this once when her and the Green Lantern were trying to fake her death.

Flight: Granted by Hermes (God of Messengers). Wonder Woman is capable of unassisted flight through an as yet unknown but probably magical means or through telekenisis. Her aerial maneuverability is not as developed as aerial combatants such as Hawkman or the Black Condor, but she is still a relatively capable aerial combatant as well. Wonder Woman is capable of flying at speeds of greater than escape velocity. She has been clocked at Mach 5 (hyper-sonic) traveling in sustained flight and can go much faster if need be.

Superhuman Speed: Granted by Hermes (God of Messengers). She is able to think, react and move at superhuman speeds. Her top speed is high hypersonic(It's lightspeed in some instances but it may not be consistent) and according to Flash, she can easily keep up with him but it should be noted that the Flash does not usually go at his nearly max speed which is lightspeed, unless the situation is severe and calls for it. Wonder Woman is most likely faster than Superman. She would have to be, to be able to deflect rapid fire from guns.

Superhuman Reflexes: Granted by Hermes (God of Messengers). Wonder Woman possesses reflex abilities similar to speedsters, such as Jesse Quick and Max Mercury, and has been noted as being faster than Superman's. She is able to keep up with Jesse Quick with ease, referencing her patron deity of speed and messenger of the gods, Hermes, as the source of her powers. Wonder Woman's reflexes are far beyond the limitations of the finest human athletes. She has been able to react to a barrage of gunfire from multiple opponents at once unharmed. Batman noted that her reflexes are superior to that of Superman.

Superhuman Agility: Wonder Womans's agility is far beyond that of even an olympic level athlete, as is her balance and coordination.

Superhuman Stamina: Wonder Woman can last a great deal of time in any fight and with virtually anyone. She has held her own in combat with foes as powerful as a Doomsday clone. She doesn't tire out, as her body produces no lactic acids in her muscles.

Enhanced Healing Factor: Granted by Demeter (Goddess of Earth). Like the Earth, Diana is constantly renewing herself, allowing her to quickly heal mild to moderate injuries at an amazing rate. Her normal regenerative abilities allow her to recover from injury within seconds to minutes. She possesses an incredible immunity from poisons, toxins, as well as disease. In rare cases where she was gravely injured or where another has managed to severely poison her, Diana showed the ability to physically merge with the Earth, causing whatever injuries or poisons to be expelled from her body as she regains shape. Wonder Woman does not age like a regular human either. She is immortal while on Paradise island.

Oneness With Fire: Granted by Hestia (Goddess of the Hearth). Apparently making her a focus of truth.

Empathy: Granted by Athena. (Goddess of Wisdom) "The Sight of Athena" apparently grants her increased insight. (For example, Diana can often detects others' emotions, and is now so fully immune to Doctor Psycho's illusions that she usually is not even aware of what illusions he is attempting to project. Apparently most forms of mind control will not work on her either). She can also detect other people's emotions. Even other high-level telepaths would be unable to read her mind or attack her in such a manner.

■Enhanced Hearing Dimensional Teleportation: On occasion, Wonder Woman can literally leave the planet through meditaion. She did this to rescue Artemis when she was in hell, and has even conversed with the Greek Gods on occasion.

Master Combatant: Diana is the finest warrior ever born among the Amazons of Themyscira. She is a master of armed and unarmed combat, proficient with nearly every weapon ever made (especially the bow and the javelin) and the exotic martial arts styles of the Amazons. Batman once remarked that Wonder Woman is the best melee fighter in the world.

Master Tactician and Strategist: Diana is also an accomplished strategist and tactician, trained in the arts of leadership, persuasion and diplomacy, and possesses a great deal of courage as well. She is a gifted leader.

Multi-lingual: Diana has exhibited heightened proficiency with languages, being able to speak her native Themysciran, Ancient and Modern Greek, English, Spanish, Portuguese, French, Mandarin Chinese (she expressed "difficulty" with the tones of Cantonese during an interview with Lois Lane), Russian and Hindi. Plus, through precise muscle control, she can mimic other peoples voices for short conversations (telephone). It is more difficult, (though it can be done), for her to mimic a mans voice than another womans voice.

Wisdom: Granted by Athena (Goddess of Wisdom). Diana possesses great wisdom and intelligence, though the degree varies from author to author. She is among the smartest and wisest members of the Justice League of America, along with the Martian Manhunter and Batman.

Expert Lasso Wielder: Can use the Lasso of Truth as an offensive and defensive weapon.

Physical Beauty: Blessed with this gift, Wonder Woman is generally seen and known to be as beautiful as any supermodel.

Equipment: ■Indestructible Gauntlets: Modeled after the shackles the Amazons were once enslaved with. The gauntlets were formed from the remains of Zeus's legendary Aegis shield, and were re-forged for her use by Hephaestus. Diana's superhuman reflexes enable her to use the gauntlets to easily deflect projectiles (such as bullets) and powerful energy blasts from beings such as Ares and Darkseid. She is even fast enough to protect herself from multi-vector attacks. At close-range the gauntlets block blades, weapons and punches. In some stories, Diana has used the gauntlets as a dual defensive/offensive weapon, redirecting energy blasts back to their point of origin or other targets. They are even able to deflect Darkseid's energy attacks. When crossed, the gauntlets generate a remnant of the Aegis itself, forming an impenetrable barrier just in front of them which allows Diana to protect herself and those behind her from area attacks. With bracelets forged by Hephastus, Wonder Woman boosts her resistance to injury with her indestructible bracelets. She is able to deflect attacks that might otherwise cause her considerable injury but she can only deflect attacks she is aware of. It has recently been revealed that the braclets, as they were made from Zeus' legendary Aegis, have the capability to discharge lightning from them. Zeus himself confirmed this revelation, stating that the code was merely "unlocked" by Diana.

Write the text of your article here!