Diana Prince Daughter of Hippolita Amazon Queen of Thermiscyra or as she is more commonly known as by her public identity of Wonder Woman is the primary (main) female protector of Earth-01A. Diana was predetermanately destined by the Goddess Athena to be sent into Mans World in order to insure peace and to prevent any mass man made disasters from any possible future wars. 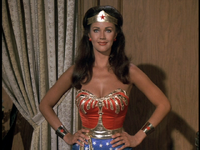 While Wonder Woman shares many similar powers and abilities to Superman she is still not as nearly as powerful as him. In fact the only main reason that Wonder Woman even is capable of even 1 fraction of Supermans abilities is mainly due to the Magical physical augmentation made from her golden belt, (given to her from her Mother who had recived it from Athena) Headband (or Tiara) and partial invulnerabilty due to her weapon inpact resistant bracelets made from the Nigh Invulnerable metal Feminium

Maximum Lift Capability:1 to the Power of 500,000 Metric Tons (most of this strength comes from Magic Belt)

Retrieved from "https://dcfanfiction.fandom.com/wiki/Wonder_Woman_(Earth-01A)?oldid=33008"
Community content is available under CC-BY-SA unless otherwise noted.