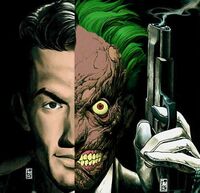 Jeffery Dent is the son of Harvey Dent (Two Face).Both suffer from M.P.D, Multiple Personality Disorder. Unlike his father before him, he worked as a New Gotham crime scene analyst. Jeffery suffered from a horrible accident, in a which during a murder case, he was surprisingly attacked by the psychopath, permanently scarring one side of his face,nearly taking out an eye on the other. Jeffery took up wearing a mask, to conceal his horrendous scars, and went on to help longtime friend, Nathan Wayne (Batman) in his efforts against crime. Jeffery uses the same 'lucky' coin his father had, but in a different way. Upon finding a criminal on his own, he would flip the coin. Heads, the criminal goes to court, and tails, the criminal dies. Despite Nathan trying to convince Jeffery that death is never the answer, he continues to do what he feels is right, in order to fulfill a hidden vengeance to criminals across the nation.

Jeffery is an expert marksman, has Knowledge of law system, and is skilled in hand-to-hand combat

Equipment: Jeffery uses the same 'lucky' coin his father had. He also has Various firearms.
Transportation: None known.
Weapons: None known.

Retrieved from "https://dcfanfiction.fandom.com/wiki/Two_Face_II?oldid=19126"
Community content is available under CC-BY-SA unless otherwise noted.