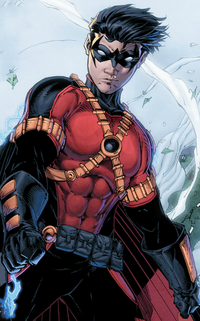 Tim Drake possesses the normal human strength of a teenager who regularly engages in intensive physical exercise and can lift at least twice his own body weight and can therefore press lift around 290 lbs. His strength makes him capable of swinging uninjured with a grapple.

Retrieved from "https://dcfanfiction.fandom.com/wiki/Tim_Drake_(Earth-X0)?oldid=31273"
Community content is available under CC-BY-SA unless otherwise noted.