Start a Wiki
The Creepette 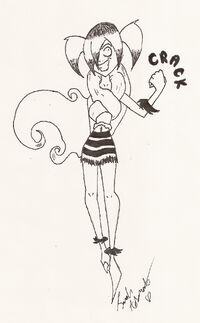 The Creepette's real name is Janet Ryder, daughter of Jack Ryder, the no-nonsense co-anchor of Summer Gleeson's "Gotham Insider." He was the first Creeper, and kept his 'other half' a secret from Janet until her 14th birthday.

After the party, Janet and her Father took a short cut down an alley to their car, where they were then jumped by a gang of thugs.

Janet witnessed her Father removing the strange patch on his right shoulder (which she also wore, but had been told it was due to her serious allergic reactions) and transforming into the Creepette.

He defeated the thugs without hesitation, but was mortally wounded by a building rigged with TNT and gasoline. Ryder managed to save his daughter, but ended up being seriously burned. As they waited for help, the Creeper began hemorrhaging and told his daughter that he loved her.

Jack and Janet Ryder had been set up by a local mob boss, who Jack had been investigating and planned on discussing on his show.

Janet held her Father's hand until he passed on, and then removed her own patch. She then set out and killed the suspected mob boss, along with plenty of innocent people along the way.

Later on, Janet discovered the unsightly scar on her lower stomach and sewed it up herself. She has a habit of 'sewing people shut’; in her attempts to contain their souls and make the deceased suffer.

She loathes Batman II and the rest of Gotham, believing that since justice cannot be served there should be no justice to begin with. Janet especially hates Batman because her Father had been a 'good-guy', meaning the Batman should have saved him.

The Creepette goes on killing sprees and finds almost everything hilarious. However, Janet sometimes discovers herself having fits or mental breakdowns due to the traumatic experience of losing her Father. She has no other living relatives, and so lives on the streets, still afraid to go near her own apartment due to her mental instability.

No morals, codes, or standards holding her back, the Creepette STILL occasionally will save the day or NOT try to kill Batman in an 'entertaining' way.

The new Creepette also has charm and a sharp wit, like her Father, which she will occasionally use to her benefit.

Though there is no question she prefers being the Creepette, Janet would give anything to have her Father alive. She truly misses him, being a Daddy's girl and all, but refuses to discuss him with anyone.

Her abilities include Enhanced strength, agility, durability and senses

Retrieved from "https://dcfanfiction.fandom.com/wiki/The_Creepette?oldid=19129"
Community content is available under CC-BY-SA unless otherwise noted.