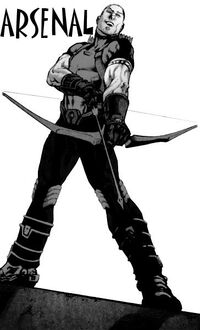 Born 1989 Dillon had a normal life till the day he found out his brother Divine had gained special abilitys. A demon know as Raphel came to kill Sean but instead possesed Dillon.In the end Sean defeated raphel and sent him back to the abyss but dillons body was left nearly dead. Sean managed to bring dillon back to life but it also cause a change in him giving him special abilitys.Now Dillon is a full time hero and student along with his brother.Going by the name The Arsenal him his brother and there team defend chicago from evil.

While attending ISU with his bestfriend Dan Farrel, dillon tells dan of his abilitys and how he wants to start fighting the scum of chicago but he need some equipment to help him so dan being a geniuss inventor makes dillon his equipment with some of his own upgrades. Taking up the name The Arsenal dillon heads out on his first misson which turns out to be a building on fire. Dillon evacuates the building but hears that a wife and her two children didn't escape and died. Feeling like he failed dillon gives back his equipment to dan and says he needs to leave to find himself and how to become a hero.

Journey for the Temple

Months after traveling around the united states saving poeple and defeating evil dillon hear of a place in asia were he can truly learn how to fight evil.

Death of a Hero

800 pds at max and when muscle inducers are activated anywhere from 1-2 tons without effort.

Retrieved from "https://dcfanfiction.fandom.com/wiki/The_Arsenal?oldid=5694"
Community content is available under CC-BY-SA unless otherwise noted.