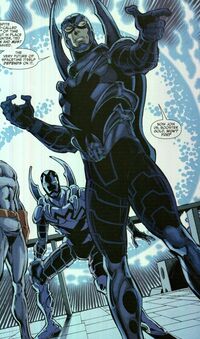 Skilled Acrobat: Kord was an accomplished acrobat, who more often than not, utilized this greatly into his hand-to-hand fighting style.

Martial Artist: Had studied with several martial arts masters, and can out-fight just about any group of thugs or criminals with his fighting skills alone.

Ted originally had the strength of a man his height and weight who engaged in regular intensive physical exercise. However, the discovery of his heart condition limited what he could safely exert.

Retrieved from "https://dcfanfiction.fandom.com/wiki/Ted_Kord_(Earth-X0)?oldid=29091"
Community content is available under CC-BY-SA unless otherwise noted.