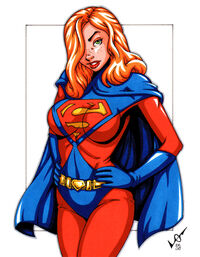 As a young girl Jane was always shy and curious, some even called her gentle. But when she would get angry or frustrated she would start to show the abilities in her powers. Later on in life she learned to control that angre, and learn to fit in. Years passed before she was able to get a job at the Metropolis Planet, but the only thing that would usually get between her and her job was Cole Kent. He was always getting on her nerves, and sometimes he would have a hard time getting along with her. They were later paired up as partners for stories and such until their next issue. But it was so good they were pair up for more and more stories. They finally started to talk about Suprememan in their stories. Keeping on the story she started to get consumed into it and wanted to know the secret identity of him. She then started to become this superheroine long enough to find his identity. But the saving people started to consume her as well, and since then she calls herself Supremewoman. And after a couple of rescues she finally met up with Suprememan and became fast friends.

Her limit of strength is picking up Pluto.

Jane is a lesbian.