Kal-Jor-EL, Clark Kent, Or as known by his public identity of Superman is the Primary Planetary defender and resident hero of Earth-01A. While genetically born Kryptonian he prefers to maintain his human heritage and beliefs in Truth, Justice, And the American Way. 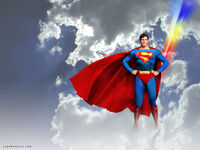 Kalel was rocketed to Earth right before the destruction of Krypton. Kal was found by the Kents who named him Clark. Clark discovers his heritage and hi powers. Clark then builds the Fortress of Solitude and moves to Metropolis. Clark becomes a reporter at the Daily Planet and dating Lois Lane. Clark then becomes Superman and battles Lex Luthor and other threats. Superman later forms the Justice League of America and marries Lois and has 3 children. Superman is soon after defeated by Doomsday after being able to kill him, Superman goes to Apocalypse where he meets the worst possible threat in the galaxy and even universe, Darksied. Superman sacrifices his life to save the universe from Darksied after 3 days he is mysteriously resurrected.

Superhuman Strength, Superhuman Speed, Combat Speed, Superhuman Agility, Superhuman Reflexes, Superhuman Dexterity, Levitation, Flight, Invulnerability, Stamina, Superhuman Jumping, Healing Factor, Longevity, Semi-Immortality, Super Senses, Superhuman Hearing, Superhuman Olfaction, Telescopic Vision, Microscopic Vision, X-Ray Vision, 360-Degree Vision, Infrared Vision, Night Vision, Electromagnetic Spectrum Vision, Eidetic Memory or Fhotographic Memory, Panmnesia, Omnilingualism, Mind Reading, Vocal Manipulation, Hypnosis, Genius Level Intellect, Hypercompetence, Omnicompetence, Solar Energy Absorption, Energy Absorption, Heat Vision, Freeze Vision, Super Breath, Air Breath, Freeze Breath, Fire Breath, Sonic Scream, Invisibility and Intangibility by vibrate his molecules.﻿ While it seems or appears that Primarily Superman has all of these abilities in a natural sense in the same way that Humans exude primary physical force in order to perform even the most small physical task in actuality because of his "Super Vision" and in combination with his Kryptonian ability to impose "Mind over Matter" over his own physical self, Superman can see into the Sub-Quantum level of all matter and telekinetically manipulate it to his own needed will. 1 good example is Supermans strength as Superman lifts a large object he can see both the InterAtomic particles both within the object and in his own arms and hands, as Superman touches the object he can mentally manipulate the interacting particles as a series of Sub-Atomic switches or "Levers" that allow him to easily lift, carry, or even throw the object at a high rate of speed.

Maximum Lift Capability:1 to the Power of 500 Quintillion Tons and much more without a known limit (However it should be noted he may have no real strength limit)