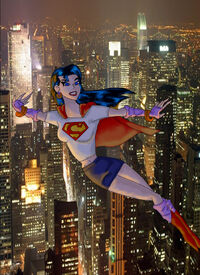 Lara Lane Kent is Clark Kent and Lois Lane's daughter. She somewhat decided to follow in her dad's footsteps and became a protector to Metropolis. She was born six years after her brother Jason and two years after Cole. she is the youngest of all three. She graduated Metropolis High School. She's currently working at the Metropolis Planet as a reporter. Her godparents are Bruce Wayne and Diana Prince.She wouldn't describe herself as the popular queen bee at high school, even if she was a cheerleader during her sophomore year. she sometimes feels like the "Odd Girl Out" because of her superpowers. she has a spunky, sassy attitude, many compare her to Lois. She has had a couple of relationships. Her most complicated relationship has been with Nathan Wayne. They have had an on and off relationship. They finally decided to go our own way after five years of a relationship.they decided to see other people. Nathan is now dating Dana and she's dating Charlie a photographer at the Metropolis Planet. It was hard for them to leave each other. he's still convinced that they belong together, since in the past they were lovers (Thomas Wayne and Lara Lor-Van) and the fact that when they went to the future they were married.

She's stronger than any ordinary human, peak human and superhuman but not as stronger as Clark or Cole.

Retrieved from "https://dcfanfiction.fandom.com/wiki/Supergirl_II?oldid=33383"
Community content is available under CC-BY-SA unless otherwise noted.