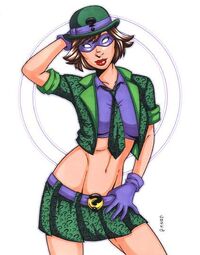 Rachel was born to Edward and Julie in New Gotham. She never met her mother because she died during childbirth, and she never met father because he was in Arkham Asylum. she spent the first eighteen years of her life jumping from foster home to foster home. After she graduated Gotham U, she got her first job at Wayne Tech as a computer programmer. Even though she was very attractive, all of her male coworkers ridiculed her because of her nerdy and awkward personality. She was starting to get annoyed that her fellow coworkers were making fun of her and that her supervisor was making sexual remarks at her. One night as she was going to her car when her supervisor grabbed her from the back took her to the elevator and raped her. When she got home the following morning, she was enraged and traumatized, she decided to take revenge on her supervisor. she decided to become the Riddleress and she kidnaps Mr.DiScala,her supervisor, and sends Batman puzzling riddles to rescue DiScala. Batman rescues him but not before Rachel gets her revenge by torturing him. She is then sent off to Arkham.

Rachel is skilled in Gymnastics. she is also a great puzzle solver and has Genius level intellect

Equipment: She carries a staff with a question mark on it. Like her father, she is the master behind various deadly puzzles.
Transportation: None known.
Weapons: None known.

Retrieved from "https://dcfanfiction.fandom.com/wiki/Riddleress?oldid=19130"
Community content is available under CC-BY-SA unless otherwise noted.