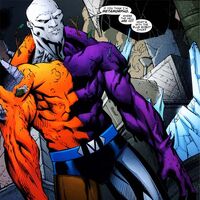 Elemental Transmutation: Can transmute his body to any of a wide variety of elemental compounds and form it to his will. Originally, he was limited to the elements which occur naturally in the human body. Over time, this limitation seems to have disappeared. He can alter the shapes and consistencies of these elements and combine them to form complex compounds. Rex can assume forms of gas, liquid or solid states.

Retrieved from "https://dcfanfiction.fandom.com/wiki/Rex_Mason_(Earth-X0)?oldid=31312"
Community content is available under CC-BY-SA unless otherwise noted.