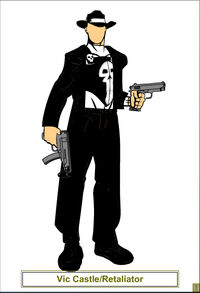 Vic was an orphan in his childhood with violent tendencies. He often was defiant and got into trouble while at the Catholic orphanage he lived at.

Vic attended college and had a crush on fellow student Emma Lane (a fusion of Lois Lane and Emma Frost), but met his future wife Maria, and after college got married.

Vic became a reporter in Hub City and was very good at his job, going deep into investigations. One day he went to deep into the affairs of a crime lord, and managed to get him arrested. Vic and his family then went through witness protection and went to New Gotham.

Vic and his family lived in New Gotham for a while happily and went to Central Park for a picnic. The mob boss he helped put behind bars found at he was there and sent his men to kill him. His enforcers attacked and Vic's wife and children were all slaughtered before his eyes. He managed to survive but vowed vengeance.

He had vowed vengeance but didn't know where to start. He eventually ran into an old teacher of his named Aristotle Lieberman (a fusion of Aristotle Rodor and Microchip). They collaborated together and Aristotle armed Vic with several weapons, and a battle van. Vic got a blank face mask that he would wear to hide his identity, and donned a black outfit with a skull on his chest. He said that he was going to retaliate against criminals who plague the world. Aristotle took the nickname Tech, while Vic took the alias of the Retaliator.

In Chicago Retaliator fought against its organized crime and eventually found himself beaten down by some mob enforcers. When they were about to kill him he was saved by the super hero Iron Beetle (a fusion of Ted Kord and Iron Fist). Iron Beetle had just had a falling out with his former crime fighting partner the Power Peacemaker (a fusion of Peacemaker and Luke Cage). The two formed an alliance and fought against organized crime in Chicago.

After a while the two are invited to join the Watchmen, a team of super heroes being brought together by Shang Cannon (a fusion of Thunderbolt and Shang-Chi). The other members included the Power Peacemaker, Phantom WIng, and Captain Galaxy.

After a time the team disbanded and Luke Black disappeared. Retaliator found this out and went into Black's apartment and discovered that Luke Black was in fact the Power Peacemaker. Retaliator figures that the targets could be costumed heroes and went to warn his old friend Ted Rand and then Captain Galaxy and Phantom Wing who now live together. Meanwhile Ted spoke to Shang Cannon about what happened.

Retrieved from "https://dcfanfiction.fandom.com/wiki/Retaliator?oldid=3980"
Community content is available under CC-BY-SA unless otherwise noted.