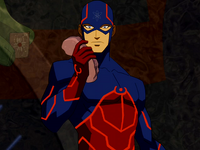 Microscopic Stability: For some reason, Ray's physiology allows him to not explode when he is miniaturized unlike other living things which explode after a short time of being miniaturized.

Size Alteration Able to shrink his body to varying degrees (including the subatomic level). As the Atom, Ray can assume any size from his normal six-foot stature down to sub-microscopic, although he generally deems a height of six inches as most functional.

Judo: Ray Palmer often finds himself in situation where physical violence become necessary. As such, he has developed a proficiency in the martial arts form known as Judo.

Physics: Dr. Palmer has a Ph.D. in physics and was a full professor at Ivy University.

Master Swordsman: The Atom used a long sword as a weapon while living among the Katarthans, gaining considerable skill in its use.

Transportation: None known.
Weapons: The Atom used a long sword as a weapon while living among the Katarthans, gaining considerable skill in its use.

Indigo Tribe Power Battery/Staff, Indigo Power Ring (Formerly): Given to Ray when he was chosen as the deputy for the Indigo Tribe which he used for the remainder of the Blackest Night, before being discharged after the battle.

Retrieved from "https://dcfanfiction.fandom.com/wiki/Ray_Palmer_(Earth-X0)?oldid=31012"
Community content is available under CC-BY-SA unless otherwise noted.