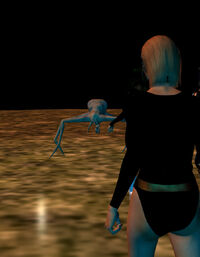 Mudala was banished on Paseth 6,000 years ago. The only indigenous intelligence on the plant were the crawlers. Retaining some of her God like powers, she chosen one to become her regent, and named him Darkin. She would give him Humanoid form, as well as many more. The Crawlers are heavy breeders in Xenobyte form, but in Humanoid form, are very intelligent. They also possess a superior strength that carries over from they Xenobiotic form. Many Xenobytes have lived for Thousands of Years. The males are brought up as soldiers, as the females are workers, and breeding stock. Over time, the Pasethians would travel the stars enslaving worlds, as colonies, all under the rule of Mudala. It was when they attempted to enslave Earth (Prime) that they faced harsh resistance when Wonder Woman, Superwoman, and Jade destroyed Mudala's Trans-Universal Portal that allowed them to travel great distances.

In Humanoid form, they can be disoriented.

Retrieved from "https://dcfanfiction.fandom.com/wiki/Pasethian_Crawler?oldid=4681"
Community content is available under CC-BY-SA unless otherwise noted.