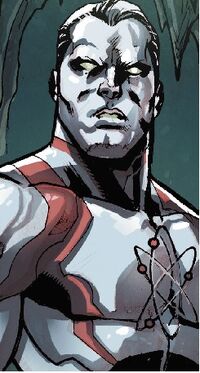 Dilustel Armor: Captain Atom's metallic shell, or "skin", is composed of a portion of the alien being known as Silver Shield, and is called Dilustel. Pieces of the alien's metal body were used in the Captain Atom Project, Project Major Force and similar projects thereafter. Nathaniel is able to coat himself with the metal, either partially or totally. Atom's symbiosis with the metal is such that even partially armored, he is able to access the Quantum Field.

Class 100+ ; Captain Atom is strong enough to lift far in excess of 100 tons with ease. He can physically engage the likes of Superman in direct combat.

Involuntary Quantum Jumping: If Atom absorbs too much energy at once, he is sent hurling through time. Depending on the type of energy absorbed, he either goes forward or backward in time.

Retrieved from "https://dcfanfiction.fandom.com/wiki/Nathaniel_Adam_(Earth-X0)?oldid=31010"
Community content is available under CC-BY-SA unless otherwise noted.