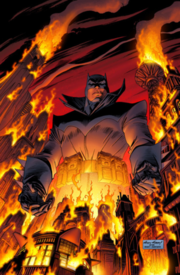 He is the son of Bruce Wayne and Selina. He also has an on/off relationship with Lara lane Kent.

During his childhood Bruce would send all the time he could with Nathan. He would even tell him stories at night, including the Batman stories. One night Nathan woke up to get a drink of water, and saw his father near the fireplace. He held a picture of Batman and told himself, "Stop it Bruce. You have responiblities now. I'm going to spend every minute I can with my son. I don't want him growing up wishing that his father was their. I stopped being Batman ever since I had a child." Nathan moved by the speech he went back to bed. Years past until The day that his father and mother died. And when Martian Manhunter told them about the Justice League he gave him his father's and mother's will. Leading him to become Batman II.

Proficient in gymnastics and acrobatics.

His father was one of the best fighters in the DC Universe.

Batman II keeps most of his personal field equipment in a signature piece of apparel, a yellow utility belt.
Transportation:

The Batcycle is a street vehicle that is used by Batman II on numerous occasions.
Weapons:

Retrieved from "https://dcfanfiction.fandom.com/wiki/Nathan_Wayne_(Earth-01A)?oldid=5263"
Community content is available under CC-BY-SA unless otherwise noted.