Ming Ming Yaguchi is the daughter to Reidou Lin Yaguchi and Daifu Yaguchi, two well established shop owners in Metropolis. Originally hailing from an ancient clan in China, Ming and her parents moved to America when Ming was only three years old. They opened up business in the city of Metropolis (Specifically the Chinatown District) owning an equipment shop as well as a ramen shop. Ming Ming is a freshman at the University of Metropolis with a career path in Digital Media. Ming possesses super-strength in which she was born with. Ming Ming is a member of Savior Core. 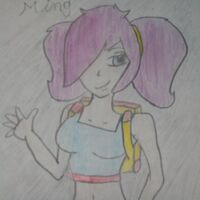 "Hi, I'm Ming-Ming Yaguchi. I'm your normal college student, well normal by the standards of a meta-human. That's right, I'm a badass super hero. My power? Super strength …and some pretty gnarly equipment. Now I don't wear all that shiny spandex, but I figure I can still make a difference in the world. I'm Ming, and this is my story"

Ming was born into the Panda Clan, an ancient clan within eastern China. Ming and her family moved from China to Metropolis when Ming was only three years old. Her parents tried to maintain an environment similar to that of her homeland, but the melting pot that was America allowed Ming to assimilate into it's own customs. The only thing Ming maintained from her heritage is the knowledge of the language and the knowledge of the family she had in China. It was clearly present that Ming was intelligent, and her parents led a harsh regime to maintain her intellect. Ming also had another distinguishing characteristic. This was her super-strength. Her utterly incredible amounts of strength made her peers fear her. They were to afraid to make fun of her. She wasn't an outcast, but she could tell all of her many friends had all feared her. Ming was always interested in technology and weaponry. Combine this with her sense of justice, and Ming became a perfect addition of Savior Core when she first began college at Metropolis University. Ming provides her power and intellect to the team. Ming Ming is enemies with her cousin, Shun a renegade ninja from her homelands. This is largely due to the fact that Shun's actions led her clan to suffer from a Civil War which forced Ming and her family from China. She also dislikes him for the trouble he has caused for the people of Metropolis under Circe's guidance.

In the Young Justice universe, Ming's story is fairly similar to her real one. However, she is still in high school (being only 16) and has yet to join Savior Core. Ming is offered a position on Young Justice on multiple occasions, but refuses stating that she works alone. She does however care for the team, and will help them when she can.

Super Strength: Ming's strength is at an incredible yet unstable level. This is shown when Ming threw Cotton Candy threw a brick wall at the carnival. It is shown again, when she is turned against her will when facing Romeo Rodriguez, as she launches a bus filled with passengers at the unsupecting heroes. Her strength pales in comparison Superman, though even he is impressed by her strength considering she is human. This strength extends to her defense as well. This is shown when she plays baseball with the Flash. When he throws the ball in her direction at amazing speed, she is just barerly able to hit the ball with her fist merely skimming it, but the impact of the punch sends the ball flying across Metropolis. Her strength extends into her legs as she is able to propel herself to incredible heights with a jump, as well as jump and glide mid-air.

Technological Intellect: Ming is extremely intelligent, and is capable of using this intellect to help her team. She has technological weapons at her disposal.

Ming is extremely powerful in terms of physical strength.

Equipment: Sticky Bombs Grappling Hook Bombs Taser Whip Smoke Bombs Spiderbots
Transportation: Ming either uses regular transportation (Buses, cars, taxis) to get to her destination or she takes to the rooftops to get their faster.
Weapons: Her fists and technology.

Ming-Ming can be an apathetic character. She is lazy (however she is physically fit), when it comes to most things. Work isn't even in Ming-Ming's dictionary. However she tries her hardest when working to achieve a goal she really wants. She can often be clumsy and have an apathetic outlook on life. She isn't easily enthused, but it isn't very hard to make her laugh. She is often times stressed from work, being a hero, and school. Ming-Ming loves to draw because it relieves stress. Whether being guided by the night-time moonlight, or on the calm bliss of a rainy day. Ming-Ming is known to also be very sarcastic though she believes she isn't good at it. Ming tries to contain her anger the best she can, because her getting mad can lead to others getting hurt. She is able to for the most part. She will however take her anger out on villains, and gladly admits that it gives her joy to beat up on the bad guys.

The Adventures of Ming Ming

Retrieved from "https://dcfanfiction.fandom.com/wiki/Ming_Ming_Yaguchi?oldid=6030"
Community content is available under CC-BY-SA unless otherwise noted.