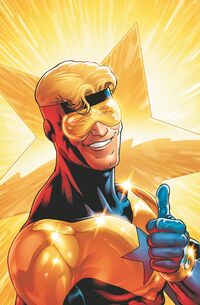 Humiliated in his own time-period, the 25th century, Michael Jon Carter steals future technology and a security robot named Skeets and travels back into the 20th century to become the heroic Booster Gold. He is now the Guardian of the Time Stream and protects it with the help of Rip Hunter.

Retrieved from "https://dcfanfiction.fandom.com/wiki/Michael_Jon_Carter_(Earth-X0)?oldid=28433"
Community content is available under CC-BY-SA unless otherwise noted.