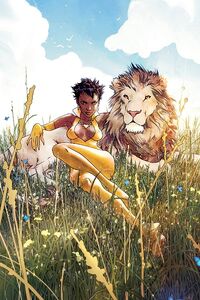 The Red Conduit: Allows her to tap into the Morphogenetic Field of Earth which is also called The Red. Allowing her, among other abilities, to tap into the the abilities of animals on the planet earth.

Animal Behavior: One apparent drawback of Vixen's powers is that she is not always able to control the inputs from the Morphogenetic field. Sometimes, she has absorbed unwanted animal behavior, such as instinctive rage. Meaning the longer she stays in contact with the Morphogenetic field, the less human and more animal she seems to become.

It is unknown what would happen if Vixen tried to use her magical abilities on an alien animal, or if she would gain access to the Morphogenetic field of another planet.

Equipment: Tantu Totem: Vixen wields an object called the Tantu Totem, a fox-shaped talisman, which enables her to tap into the "morphogenetic field" of the Earth, sometimes known as the Red. This allows her to mimic the abilities of any animal she can think of, by simply focusing on a specific animal abilities and then drawing it directly from the field. She has demonstrated the ability to hold onto the Morphogenetic traits of an entire forest of animals. The Totem isn't the source of her powers but rather helps her channel the power.
Transportation: None known.
Weapons: None known.

Retrieved from "https://dcfanfiction.fandom.com/wiki/Mari_McCabe_(Earth-X0)?oldid=31038"
Community content is available under CC-BY-SA unless otherwise noted.