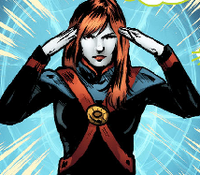 Shapeshifting: She can change her form completely to alter her physical appearance, clothing and even mimic other people. However, she finds male forms more difficult. She is not restricted to humanoid forms and has grown several extra arms as needed.

Camouflage: She can change the appearance of her form (and her clothes) to match her surroundings, but she is not completely invisible. Her Bio-Ship also has a camouflage mode that she can activate telepathically.

Superhuman Strength: Like all Martians, Miss Martian has strength above that of a human. It is not, however, on the same level as mainstream martians.

Density Shifting: Miss Martian is able to shift her density, and is able to phase through objects or become incredibly dense and difficult to damage.

Telepathy: Telepathy comes natural to Martians, and although she had trouble with it at first, she has come to terms with it on Earth. She often uses a telepathic link with her teammates, which makes communications easier and untraceable Megan can also telepathically connect with her Bio-Ship. After a botched telepathic training simulation, J'onn revealed that in terms of raw power, her telepathy is on a level beyond any he has encountered, including himself.

Telekinesis: Megan has used telekinesis to manipulate many objects with her mind. However, she can lose control when moving too many objects at once or not paying enough attention.

Flight: By using her telekinesis, Megan can simulate flight.

Retrieved from "https://dcfanfiction.fandom.com/wiki/M%27gann_M%27orzz_(Earth-X0)?oldid=31096"
Community content is available under CC-BY-SA unless otherwise noted.