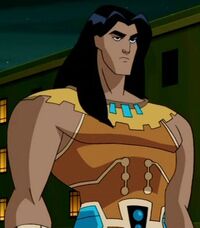 Apache Chief was given a special powder that increased his courage 10 fold. The chief can also strengthen his mass and size by saying the word "inyuk-chuk!"

At his normal size, Long Shadow possessed the strength of a man of his age, height, and build who engaged in regular exercise. By increasing his size, His strength increased in proportion to whatever height he acheived.

Retrieved from "https://dcfanfiction.fandom.com/wiki/Long_Shadow?oldid=30059"
Community content is available under CC-BY-SA unless otherwise noted.