This page is similar in name or subject to other pages.

See also Lex Luthor for a complete list of references to distinguish between these closely named or closely related articles. 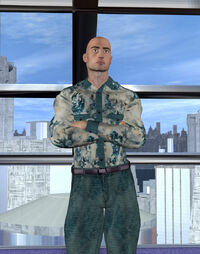 The current Luthor family has a long history with the city of New York. Some of Lex's ancestors were with the Pilgrims who came to the New land, and other ancestors of his were among the Native Americans who met them. As the centuries went on, the Luthor family grew in prominence and wealth. Luthor's great-grandfather, Wallace Luthor, was a millionaire steel industrialist/tycoon at the beginning of the 20th century. An ardent pacifist with dreams of a united society, Wallace was distressed when America was pulled into World War I. He reluctantly agreed to sell his steel for the manufacture of allied ships and weapons. In the stock market crash of '29, Luthor lost his entire fortune and was forced to declare bankruptcy. He went to his grave a penniless old man, believing that it was divine punishment for his part in the war.

Somehow, the family fortune was rebuilt by the latter part of the 20th Century, and Lex Luthor was born to New York mogul Lionel Luthor, whose Luthorcorp Industries overlooked the Bowery, and his socialite wife Letitia. His sister Lena was the only relative that he truly cared about. In his late teens, he spent time in Dodge City, Kansas, under the care of his Aunt Lena. His parents thought that fresh country air would cure the young Lex of his propensity for acting like he was the smartest guy in the room. However, Lex went on to prove that he was the smartest guy in most rooms, soon becoming head of the family corporation, renaming it Lexcorp. It was here that he met the younger Kara Kent, Lana Lang, and Pete Ross. After some months, Lex left Dodge City "with a full head of hair, and under a cloud of suspicion." He settled in New York Coty following his parents' mysterious deaths and took over his father's enterprise. As he grew further into adulthood, his hair receded over time.

Lex turned the company into a multi-national corporation that would ultimately come to dominate the city of New York. The one paper outlet that continued to be bought was the Daily Planet (he would come to buy it much later). One such critic was the young reporter Perry White, whom Luthor detested, due to his outspoken attitudes. Luthor made many criminal connections and industries, anything to help him rise to be the unchallenged master of New York. His legitimate businesses attached to LexCorp stretched from anything from telephone companies to personal gaming devices. As part of his image, Lex created the illusion of being a caring philanthropist He became the most powerful man in New York, both financially and in the world of organized crime. Lex would create havoc on the streets by selling weapons to the gangs of New York and using his primarily female staff of underlings to keep blackmail files on all of the major organized crime groups in the city, so that Lex could use them to further any schemes he had planned. However, this all ended with the arrival of Superwoman.

Several months after Superwoman first appeared on the scene, terrorists attacked a society gala aboard Lex Luthor's yacht. It is revealed during this time that he tried, albeit unsuccessfully, to romance Kara Kent as a ninth trophy wife, to which she considered him to be a misogynist. During the gala attack, Luthor observed Superwoman in action and then tried to hire her as a bodyguard after Superwoman defeated the terrorists. But when Luthor admitted that he'd anticipated the attack but allowed it to occur in order to witness Superwoman first hand, Mayor Berkowitz deputized Superman to arrest Luthor for reckless endangerment. He later was able to find a technicality in the law to escape prison time.

Luthor vowed to destroy Superwoman for this humiliation, and he has since devoted much time and energy to that goal. Luthor was a man driven to be the best, having fought his way up from lowly beginnings by his own (dubious) efforts, and was resentful of how Superwoman was given his powers by random fate of birth. Superwoman survived subsequent attempts Luthor made on her life, but she had never been able to prove Luthor's role in the attacks. Aside from Lex's immense wealth and connections, he was able to weasel his way out of trouble due to the fact that Superwoman, being liable as a witness, would have to reveal her true identity in court to testify against him.

When Kara Kent was assigned the position as Global Reporter, Lex focused his attentions on her to start a passionate relationship. He went as far as purcghasing the Daily Planet, and restricting her movements by making her Editor, and Chief. She responded by breaking off their engagement, and working on the rival paper the New York Journal. Trying to repair his relationship with her, also bought time for Superwoman to break up several of Lex's criminal projects. In the end, Lex would sell the Daily Planet, and Kara returned to work there as well. Their relationship would suffer, but the remain somewhat close friends, although Lex always springs a surprise on her regularly.

Lex forged a partnership with the alien Mudala that promise him Superwoman as his prize if he aided her in capturing Wonder Woman, and Queen Hippolytra. The prospect of an Earth he can rule over was the ultimate payoff. Working with Darkin, he made an evil clone of Superwoman, and staged a battle to the end. Jade would finally rescue Kara, and help defeat jim, but he would escape in the Trans-universal Portal, where Superwoman, Jade, and Wonder Woman would also follow him to Earth (Prime).

Gifted Businessman: Lex Luthor is one of the most shrewd businessmen in the world, a trait that has earned him an immense fortune second only to entrepreneurs like Bruce Wayne and Steve Dayton. Unlike Wayne however, Luthor is not above using cutthroat tactics, unethical practices and illegal operations to maintain the success of his business empire. At the height Lexcorp's power, Lex Luthor virtually owned every business enterprise in the city of New York.

Genius-level Intellect: Enhanced physical and cognitive abilities due to his cloned body's specific genetic design construction. Although Luthor possesses a genius level intellect, his scientific prowess is not as refined as his Earth-One, Earth-Two and Earth-Three counterparts who were able to create artificial lifeforms from scratch, inter dimensional travel and functional time travel.

Trained Combatant: Lex Luthor is also trained in hand-to-hand combat, though his personal Amazon fighting instructors consider him a a sub-par combatant with poor form.

Lex Luthor possessed a higher strength level of a middle-aged man who engaged in heavy regular exercise. He routinely works out with state of the art bodybuilding equipment, and has hired Amazon warriors to put him through a thorough exercise regiment.

His own Arrogance, Megalomania, Jealousy, Ruthlessness.

Equipment: Luthor has created and used many different advanced technological devices including his battle suit.
Transportation: None known.
Weapons: None known.

Retrieved from "https://dcfanfiction.fandom.com/wiki/Lex_Luthor_(Prime)?oldid=5003"
Community content is available under CC-BY-SA unless otherwise noted.