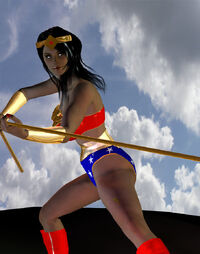 The Lasso of Truth is the primary weapon employed by Diana Primus (Wonder Woman). The Lasso was forged by the god, Hephaestus from the Golden Girdle of Gaea that was once worn by Antiope, sister of the future Queen Hippolyta (Primus). The lasso is completely unbreakable, immutable, and indestructible. The Lasso also appears to be able to alter in length, based on it's wielder's needs. It is able to restore people's lost memories, hypnotize people, get rid of illusions, and people who are in its circumference will be protected from magical attacks. Empowered by the Fires of Hestia, the Lasso forces anyone held by it to tell and understand the absolute truth. Recently, the Lasso has been shown to actually transport Diana's mind into that of whomever is tied within it. Its effects can be very dangerous, as not everyone is capable of facing the truth of their actions stripped bare of excuses.

With Wonder Woman's strength and speed, the lasso can be used as an offensive and defensive weapon.

Retrieved from "https://dcfanfiction.fandom.com/wiki/Lasso_of_Truth?oldid=4597"
Community content is available under CC-BY-SA unless otherwise noted.