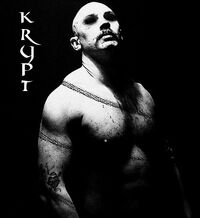 ORIGIN Born a normal kid and grew up as a normal teenager in school.Dean Brummit was average and was angry inside,his rage for his hatred of his simple life came out the day he killed his father.Locked in prison dean grew stronger and stronger mentaly and physically.He was one of the most dangerous men alive until the day of his execution.The prison he was in still used electrical execution,dean made his way down the hallway and into the chair the timer counted down till it hit one and then they threw the switch which did not kill him but made him stronger.Dean broke out of prison with his new found abilitys.

Weeks after his escape dean started fighting in a club for people with abilitys there he gained his ring name krypt were he slowly started building an army of people with superhuman abilitys.Krypt took control of the powercircle.There he recruited Quickslip, Ion-Man, Hummunculous, MicroDermal and Fringe.And turned it into a group of villians he could lead to take control of the place he despised the most, chicago, with his plan clear all krypt needed was more power.

With his gang of superpowered villians krypt plots to take power from the city and convert it into himself, and leave the city blackedout while they attack the city. The day before the plan divine and arsenal over hear krypts men talking of the plan to attack the power center. They then head to the powercircle were divine and arsenal follow. There krypt and his men attack the heroes and divine his forced to fight krypt in the ring while arsenal has to fight krypts right hand man Quickslip.

After the destruction of the powercircle krypt and what's left of his army invade a maximim security prison where an old friend of krypt's is being held. Krypt takes out the gaurds by hounds holding cell and releases him,Hound is a merchenairy with superhuman abilitys and tought krypt how to fight. News reports show the attack on the prison where divine, The Arsenal, flex, barronblaze, smoke and stasis show up to help fight of the attackers. Hound easily takes down barronblaze and stasis then escapes on his own. Krypt then makes his way down to the basement where arsenal finds krypt and his men planning to blow up the prison, the heroes escape from the prison after the evacuated the building, arsenal still in the basement is captured and is taken to the sewers as the prison exsplodes. Divine and the rest of the heroes see the building explode from the outside still believing arsenal is inside.

With The Arsenal held captive in krypts new headquarters The Cell Krypt begins building up his his army back up with his 5 generals and his 20 other members with superhuman abilitys.

Krypts plans begin with each general attacking a major corporation building with 5 superhumans for each general. Krypt Ion-Man and Quickslip head to the sears tower were they begin there destruction trying to bring down the building.Hummunculous and Hound go to the Infintrys headquarter The Lighthouse

Retrieved from "https://dcfanfiction.fandom.com/wiki/Krypt?oldid=5585"
Community content is available under CC-BY-SA unless otherwise noted.