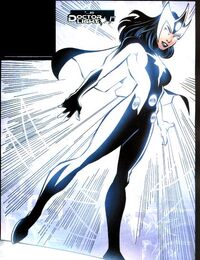 Kimiyo Hoshi is Doctor Light, a metahuman who fights on the side of the heroes. With her power over light she can perform delicate surgery or destroy an invading fleet of attackers. She is truly an illuminating hero.

Vega Energy Conduit: Able to channel energy from Alpha Lyrae aka Vega. The star is 25 light-years from Earth and is located in the Lyra constellation which is in Sector 2828. It is the same solar system where Agent Orange and the Omega Men are based. Bright and hot, it allows her access to near-unlimited energy.

Light and Energy Absorption: She can absorb all forms of illumination, and internalize it for a variety of uses. In addition, she can absorb most forms of energy and send the energy to Vega.

Light Manipulation: ability to manipulate ambient light for a variety of purposes.

Astronomy: Kimiyo Hoshi is a scientist specializing in the field of Astronomy. In addition she holds a Ph.D. in Astronomy.

Light Dependency (Formally): Her weakness is she needs a light source to fuel her powers, and being placed in an area of absolute darkness severely weakens her abilities.

Retrieved from "https://dcfanfiction.fandom.com/wiki/Kimiyo_Hoshi_(Earth-X0)?oldid=31305"
Community content is available under CC-BY-SA unless otherwise noted.