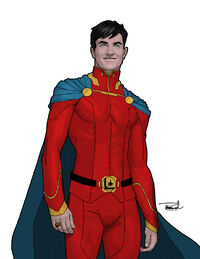 Relatives
Universe
Earth-X0
Base Of Operations

Daxamite Physiology: Lar has got powers that are native to all Daxamites if they where in a solar system with a yellow sun, similar to Kryptonians.

Soler Radiation Absorption: Born under the influence of Daxam's red sun, the ultra solar rays of Earth's yellow sun can super-energize his brain and five senses to give him other, non-muscular, super-powers, such as super-senses and mental powers, x-ray vision, telescopic vision, microscopic vision, super-hearing, super-memory and super-calculations.

Class 100+, Mon-El can lift 100 tons easily and possesses strength that is on par to that of Superman.

Lead: Unlike Kryptonians, whose super-powers are driven from them by the radioactive remnants of their home world, a Daxamite's major weakness is his vulnerability to lead, which does not exist on their planet.

Retrieved from "https://dcfanfiction.fandom.com/wiki/Jon_Kent_(Earth-X0)?oldid=33105"
Community content is available under CC-BY-SA unless otherwise noted.