Start a Wiki
Jack Napier or as he is commonly known by his public identity of The Joker is the No. 1 most powerful and dangerous crime figure in Gotham City and is the primary antigonist of Batman and also is 1 of the 12 most wanted criminal figures within Earth-01A
The Joker 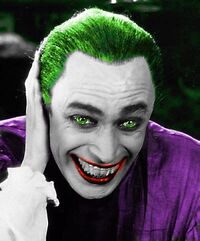 Before he became the Joker he was a man named Jack Napier. As a child he was abused by his father. His mother ran away. Jack eventually snapped and murdered his father by carving a smile on his face. Jack was then taken to a mental hospital where he was cured of his insanety..for now. When he was released he was taken in by the mob and was trained as a hitman and sent to kill Thomas Wayne and his wife. The hit was successful and Jack later married and left the mob to become a comedian which he failed at. The mob in an attemt to get Jack to rejoin them killed his wife and told him that it was a rival mob that did it. Jack took out the guy that they blamed it on. Jack then started his own gang and became a criminal called the Redhood. As the Redhood he tried to rob Axes Chemicals but a traitor in his gang tipped the police off. The police arrived but they couldnt get to Jack and his gang since they had them pinned. Batman arrive and he accidently knocked Jack into a vat of acid. One of Jacks thugs fired at Batman and accidently shot the button that pulls the drain out. Jack is then sucked into the sewers but survived thanks to his Redhood helmet. When he came out of the sewer he discovered that his skin was turned white and his hair green. Jack carved a smile on his face and laughed like a madman. Jack then killed all of his former henchmen and devoloped something called Joker Venom. Joker then killed his old boss and took over his criminal empire. Calling himself "The Joker" he began to wreak havok on Gotham. As the Joker he would constantly battle Batman.Joker was also responsible for the creation of Two-Face. Joker sometimes would war with Penguin and Two-Face for control over Gotham.Joker also creates many supervillians to fight Batman such as Bane,Killercroc,Man-Bat,and Clayface. Joker eventually frames Jason Todd(The second Robin) with the help of Clayface. Joker also causes Two-Face's death by throwing his coin off of a building and Two-Face dove off of it. Batman eventually dismantles his empire and sends him to Arkham.Joker later escapes with the help of Harley Quinn(His Pychiatrist)and joins the Legion of Doom. The team later disbands. Joker later has a daughter and son with Harley.Joker is then killed by an angry Jason Todd who ironically becomes the new Joker.

strength of an ordinary fit man

Joker is the father of Joker Junior and Harlequin. Joker was succeded by Joker X(Jason Todd)

Retrieved from "https://dcfanfiction.fandom.com/wiki/Joker?oldid=15730"
Community content is available under CC-BY-SA unless otherwise noted.