Start a Wiki
The Conjure 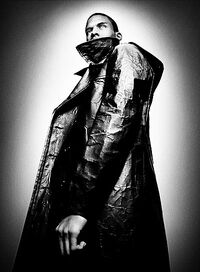 Origin Born on july 7th 1987 to a farmer and a minister. John grew up always being lucky and always wanted more in life when he was 12 his father was murdered and when he was 18 his girlfriend of 4 years mysteriously disapered, john believed his luck was running out. So he enlisted in the marines to get out and try to find something more.

John did very well in the marines and was the top marine in his unit. He grew to be a man who was capable of anything. After serving only 2 years john was called to do black ops missions in africa while there his unit was told to kill everyone in a small voodoo relgious town that the goverment thought was hiding nuclear weapons john didn't want anyone to get hurt so he tried to stop the execution he saved many lives but when a rebel force attacked his unit all but him were killed john crawled his way to a small shack for shelter, john was very hurt and near death but a mysterious man came to john and healed his wounds miraculously. John woke up several days later to learn that the man who saved him was the man john took several bullets for in an effort to save his life. The man was a hoodoo healer who told john that he was told a phophecy when he was nine of a man who would save his life and this man would be his succesor to carry on his mantle as a powerful hoodoo healer. John spent 9 months with the man who gave him his hoodoo power necklace and tought him how to use the new abilitys he was given and when john finaly left the man and his shack disapered.

Jt.jpg Back in his hometown people learn that john didn't die and were glad he was back. While home john becomes a paramedic saving lives. Things seem good till he is visited by an old friend who he thought had died during the attack in africa. Leon begins stealing souls due to him having a hoodoo charm also. Leon begins calling himself The Collector. The collector begins controling the towns people through mass hypnosis and has them attack johnny. He makes his way to town hall and stops leon. Johnny then leaves believing he must use his powers to help others.

After months of traveling and countless lives johnny travler has saved john gets a call that his father is being held captive in a near by location only to find out that The Collector has tricked john into being held responsible for the deaths of multiple victims and a robbery at a large city bank.

Dead in the Water

Johnny comes to a small town plagued with death.Where he meets up with two heroes Divine and Flex.

Johnny is asked to join the infintry as a full time member and accepts.The infintry is then attack my other dimensional villians who come to kill them, after defeating them the meet the infintry of earth nexus.

A month after the events of earth nexus johnny returns home to visit his family.And receives a call from his father that Leon has returned.Leon has become more powerful and destroys the town killing everyone in it after leon teleports johnny outside of the town.Knowing all of his family and friends are dead along with leon johnny quits the infintry and heads on the road killing every evil he comes across.

Human without his necklace/Conjure-Decapitation, Black Magic

Bullet proof,Motorcycle Chopper with on board gps and nitro's, Equiped with Spike spheres that release from the back.
Transportation: None known.
Weapons: Variety of different pistols,machine guns,shotguns,knives and exsplosives.

Retrieved from "https://dcfanfiction.fandom.com/wiki/Johnny_Travler?oldid=5620"
Community content is available under CC-BY-SA unless otherwise noted.