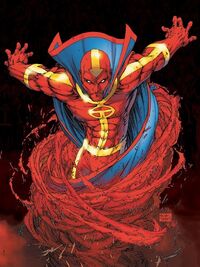 An android created by the supervillian T.O. Morrow to infiltrate the Justice Society of America. Now it is a noble superhero and member of the Justice League.

Resurrection: After death, RT's soul is able to return to his robot shell within 24 hours as long as his body is able to function.

An F5 tornado has winds of about 315 mph----His cyclone-force winds can be projected at over 350 mph from each arm.

Fail-Safe: Their is a fail-safe device in RT's neck. When struck there with enough force he will shut down.

Android Body: Red Tornado may have an extremely resilient body, but it is in no way invulnerable. He has been broken many times before, and can no doubt be broken again.

Reprogramming: Red Tornado is susceptible to being mechanically reprogrammed as well as controlled. Numerous times he has been altered in order to destroy the JSA or the JLA.

Retrieved from "https://dcfanfiction.fandom.com/wiki/John_Smith_(Earth-X0)?oldid=31015"
Community content is available under CC-BY-SA unless otherwise noted.