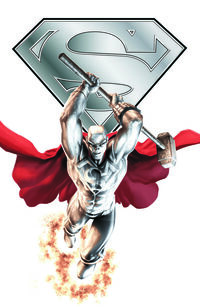 None, but wears a powered armor. Previously, during the 52 event John Henry Irons was altered by the Everyman Project and had become composed of stainless steel due to Lex Luthor tampering with John's DNA without John's consent. In 52 #29, the metal skin peeled off completely, leaving him again a normal human.

Living Stainless Steel (formerly): had a body composed of bulletproof stainless steel. In addition, he could generate enough heat to turn metal fluid (including his own body, which he could then drip off of himself in small amounts). It is as of yet unclear exactly how he generated the heat, though it might have been somewhat electric or kinetic in nature.

Genius-Level Intellect: Genius engineer and inventor. It is obvious that Dr. Irons possesses several degrees in Physics, Quantum Physics, Advanced Energy Physics, Temporal Mechanics, Mechanical Engineering, and Robotics. It is likely that he has even more education than can be currently assessed by the creation of his powered armor. Has knowledge of physics and ballistics.

Possesses the strength of a man that engages in intensive regular workouts. In armor, is capable of lifting 70 tons under optimal pressure

Electromagentic Pulses: The armor can be shut down through Electromagnetic Pulses

Equipment: Steel Power Armor: Steel's powers vary in accordance with what hardware is currently available to him. He has modified the original weapons systems and suit several times since its debut and continues to refine its abilities. With his engineering, physics and ballistics knowledge, it is conceivable that the suit may potentially possess even greater power in the future. Currently it possesses the following abilities:
Transportation:


Kinetic Hammer: His current hammer has the ability to increase it's kinetic energy the farther away it is thrown. At a distance up to 20 yards, it can stop a car, 30 yards, a truck, 60 yards, a tank, at distances greater than 60 yards, its destructive capacity rivals that of Superman for damage dealing capabilities.

Retrieved from "https://dcfanfiction.fandom.com/wiki/John_Henry_Irons_(Earth-X0)?oldid=31319"
Community content is available under CC-BY-SA unless otherwise noted.