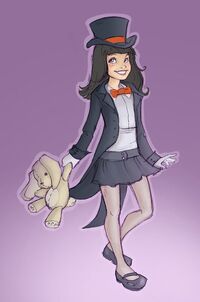 Jezebel Blood is the daughter of Jason Blood and Zatanna. She was named after the ancient Phoenician queen of ancient Israel.she joined the Justice League Heroes at the tender age of 13, therefore she is the youngest member of the team. she occasionally helps Nathan and the New Gotham Knights, like the one time when she helped stop Klarion the Witch Boy and Trigon from opening the Hellmouth and releasing all hell on earth. Nathan made an an official member of the New Gotham Knights after she helped them. She also has a demonic side that she rarely uses. she's current going out with Sebastian Faust,Felix Faust's son.

She has many different powers thanks to her demonic side. They are:

Jeze is a skilled and powerful user of magic. she's been learning ever since she was five. She may be more powerful than both her parents. Her demonic side helps her enhanced her powers.

Retrieved from "https://dcfanfiction.fandom.com/wiki/Jezebel?oldid=32995"
Community content is available under CC-BY-SA unless otherwise noted.