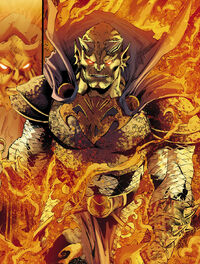 Universe
Earth-X0
Base Of Operations

The Demon is a being created by Merlin of the middle ages who merged together Jason Blood the druid and Etrigan, one of the greatest demons of Hell. Together they now work as one of the oddest heroes.

Even among demons, Etrigan is considered to be extremely powerful.

Superhuman Strength: He has above superhuman strength (mystically enhanced)

Superhuman Durability: He has a high degree of resistance to injury

Immortality: Being an immortal creature, he cannot die.

Occult Knowledge: Etrigan is also provided with insight to religious aspects and other forbidden or secret knowledge.

Master Swordsman: His skills include mastery in swordmanship.

Class 100+; Etrigan can lift over 100 tons and is said to have strength comparable to Superman in Hell. On Earth Etrigan has struggled to fight Superman and has been presented with wavering strength classes from 25 to 75.

Demonic Laws: Etrigan has all the limitations usually associated with a demon, including a weakness towards iron.

Master Swordsman: His skills include mastery in swordmanship.

Retrieved from "https://dcfanfiction.fandom.com/wiki/Jason_Blood_(Earth-X0)?oldid=30498"
Community content is available under CC-BY-SA unless otherwise noted.