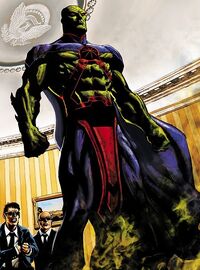 Genetically Modified Martian Physiology: Martian Manhunter has been described as "the Swiss Army knife of superheroes." He possesses many of the powers of Superman. Note: Many, if not all of the Martian Manhunter's powers and abilities are common to members of his race, even if demonstration of such abilities has not been explicitly shown in a canonical resource. His powers come from his alien physiology. Born of Mars over a millennium ago, from a super advanced civilization, boasting advanced technology and genetic modifications over its people, the Martian Manhunter would appear to be a genetically modified being with incredible powers stemming from the changes made in his body.Whether this is their natural state or an advanced state given to only a few individuals is unknown. The Martian's physiology would seem to be composed of a complex molecular chain that resembles polymer bonds but with the ability to be altered at will. The Martian Manhunter can change his mass, color, relative shape, imitating even clothing if desired. The bio-polymer is extremely flexible, durable, incredibly strong for a biological material and apparently self-sustaining[1]. It is unknown if the Martian Manhunter actually needs to eat or not but he has been seen consuming food, particularly "Chocos," a brand of cookies.

Class 100+; J'onn can lift well over 100 tons . On Earth, the Martian Manhunter is physically one of the mightiest heroes possessing vast levels of superhuman strength, strong enough to lift tremendous weights even at a rest state, however on Mars J'onn possesses the strength level of an average adult male Martian in peak physical condition. He has shown that his strength is on par to the likes of Superman and Wonder Woman and he has shown that his is so strong he is capable of helping move objects as large as the planet earth.

Equipment: The Martian Manhunter owns one Kuru pendants. The pendant acts as a repository of ancient Martian lore and knowledge.

J'onn is also known to carry a bag of Chocos with him for snacking.
Transportation: None known.
Weapons: None known.