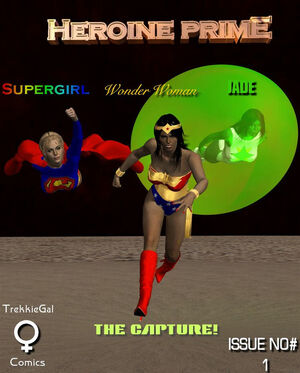 Appearing in "The Capture"

Synopsis for "The Capture"

Diana Primus (Wonder Woman) is captured by alien on Themyscira, and taken to the planet Paseth as rhe Earth is enslaved. Her journey will find her subjected to cell extraction for cloning. Upon arriving on Paseth, she finds herself in strange neck collar, and belt they limits her abilities. She proceeds to walk in the darken corridors unril she stumbles on Supergirlin a weakened state, and then Jade whom has been presumed dead for the past 4 years. Leaving their darken enclosure, they are attacked by alien creatures insistent on assaulting them. The assault enrages Jade whom remembering her time in the Orphanage re-ignited her Starheart powers, and free Diana, and Kara, as the set off into the caverns for answers.

Herione Prime is an Adult Graphic Novel. 18 and over only