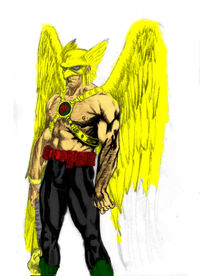 "Yeah I like girls, but dam some guys are HOT."

Hawkboy was was of the many to fall victim to Roulette's evil Glamour Slam, a tournament were young homosexual heroes were forced to fight each other against their will for entertainment. Hawkboy was forced to fight Crimson Canary and Nighthunter while he was teamed up with Kid Vixen. In the end Hawkboy is the last one released from Roulette's control. When the four heroes refused to fight one another Roulette released Wonderboy into the arena. Hawkboy was one of the main participants to keep Wonderboy at bay but in the end they were all saved by Nighthunter shutting off Roulette's mind control device.

Hawkboy was one of the five to be chosen as a founding member of the A-Class Titans, the Titans Delta

Enhanced physiology thanks to his Thanagarian heritage.

Hawkboy is very skilled in the use of close range weapons as well as hand to hand combat.

About 30+ tons. Golden Eagles strength level is increased by the Nth metal. He is capable of ripping a car door of its hinges with little effort.

Write the text of your article here!

Retrieved from "https://dcfanfiction.fandom.com/wiki/Hawkboy_(Earth-69)?oldid=33151"
Community content is available under CC-BY-SA unless otherwise noted.