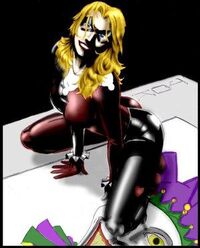 Harlene Napier was born in New Gotham on March 1981. She is the daughter of Batman's arch enemy The Joker and Harley Quinn. She was born two years after her older brother JJ Jr. She never met her father because he died a year before she was born. After she was born Harley decided to leave the crime life behind and decided to take her job back as a psychiatrist. Harlene graduated New Gotham High, and was awarded a gymnastics scholarship to study psychology at Gotham U. Upon learning about her parents' past, she was fascinated and decided to become a criminal alongside her brother and fiance. She also formed a partnership with Lillian Isley aka Ivy, Poison Ivy's "daughter".

Harlequin possessed above-average agility and fighting skills. She was an Olympic-level gymnast and acrobat. Early in their partnership,Ivy injected Harlequin with a toxin antidote, which rendered her immune to certain chemicals and diseases, and had the side effect of enhancing her strength and stamina, allowing her to survive normally fatal accidents

Equipment: None known.
Transportation: None known.
Weapons: She carries an assortment of clown-themed weapons such as Bang flag gun,

Retrieved from "https://dcfanfiction.fandom.com/wiki/Harlequin?oldid=19128"
Community content is available under CC-BY-SA unless otherwise noted.