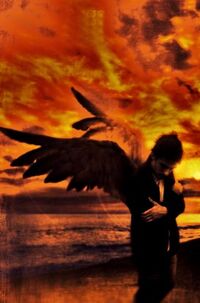 ORGINS Born on july 24th 1918 in louisiana to Trevor lebeou one of the first evolved humans who was born 1020, named johnathan carlisle lebeou. John grew up normal until his 18th birthday when his father took him to get his first tattoos one of the family symbol and the other the family crest. When john received these tattoo's trevor activated johns abilitys.

The Journey for Truth

John journeys out to find an oracle named truth to find his purpose and in the process wants to become a hero to save lives so he gives himself a secret identity and wears a suit given to him by the oracle which was johns fathers.Received all of his tattoo's from the oracle.

Deal with the Devil

John returns home to start his adventures as a hero after a few weeks johns father is murdered and flex trys to find a way to bring his father back so john makes a deal with the devil himself. The deal is john must complete 5 tasks that send 5 different supernatural beings back to hell and his father will then be ressurected from hell.

Flex faces the challenge to rid a town of evil spirits trying to steal the souls of the towns people.

Flex's friend Alan becomes a vampire and is being controled like a army of other vampires by a vampired lord to capture people and keep them alive to harvest there Blood.

After plane wreck on a island flex must keep him and the other survivors alive from a community of werewolves who live on the island, who live in a 1950's styled community.

Weeks after escaping the island flex comes apoun a hotel for magical beings but when a group of wiccans start causing deaths flex takes action.

Near the end of his deal with the devil to get his father back. Flex follows a man who has stolen three of his tattoo ability and is using them for himself, then goes threw a mirror that transports the person to a different dimension where the ruler of that dimension steals emotions and leaves its people empty shells of there former selves

After the 5 souls are sent to hell john returns to his fathers grave were he meets the devil and johns father returns from death. The devil then tells john that if he were to die he would not go to heaven due to the kill of other beings and that his soul would burn in hell. The devils final words to john are you might burn sooner then you think.

Months after his fathers ressurection john notices changes in his fathers behavior and soon learns that his father came back possesed by a demon who then kills john and exits trevors body and drags johns soul down to hell. John wakes up in a dark cold abyss and finds a door gaurded by demon knights who open the doors of hell to flex, he then enters and falls down a pit into a long hallway with pictures of former devils on the walls.There a guide shows flex out and plans on handing him over to demon torturists but flex fought them off and escaped into what appears to be hell chicago. Flex heads down into a subway station and see's many lost souls. There the demons find flex and attack him. Then a man shows up and kills the demons and and then leaves as flex fallows him through the hellish city.

Dead In the Water

Normal 950pds/With tattoo armor he can lift 2tons without effort.

Retrieved from "https://dcfanfiction.fandom.com/wiki/Flex?oldid=5702"
Community content is available under CC-BY-SA unless otherwise noted.