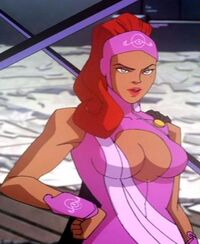 The knockout beauty known as Looker is a former member of the original Outsiders, named so for her drop dead looks. She possesses powerful psionic making her one of the most powerful mentalists on the planet. After losing her humanity to a Vampire she also acquired a vampires abilities and weaknesses.

Psionics: Looker possesses the full spectrum of psionic abilities including:

Retrieved from "https://dcfanfiction.fandom.com/wiki/Emily_Briggs_(Earth-X0)?oldid=29923"
Community content is available under CC-BY-SA unless otherwise noted.