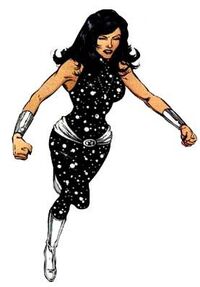 Donna is the daughter of two legendary superheroes Batman and WonderWoman. She is Nathan's half-sister. the first twelve years of her life she never met her father because her mother left to Theyscira before Bruce could find out. During her first few years Donna was trained by her mother in the ways of the Amazons. At the tender age of 15 she decided to leave Themyscira to go to Man's World. There she met her father and both her brothers. She helped her brothers establish the JLH. She is also the ambassador for Themyscira in the United Nations.

Equipment: She also wears the Bulletproof bracelets that her mother wore and carries the same magic lasso. Also giving her a shield for protection in battle.


Transportation: Her mother gave her the Invisible Jetplane on her 18th birthday.

Retrieved from "https://dcfanfiction.fandom.com/wiki/Donna_Troy_Beyond?oldid=19119"
Community content is available under CC-BY-SA unless otherwise noted.