This page is similar in name or subject to other pages.

See also Wonder Girl, Troia for a complete list of references to distinguish between these closely named or closely related articles. 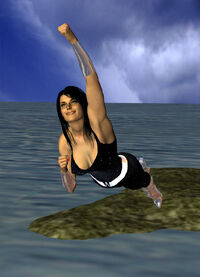 Donna was created to be a playmate for the young Wonder Woman by the sorceress Magala, who used a magical mirror to create a duplicate of Diana, though with her own personality. She was abducted by Dark Angel (who mistook her for the real Diana) who cursed her to experience a cycle of countless tragic lives, given the name Donna Troy as a cruel joke to her origins. But it would not be until the intervention of Wonder Woman, Hippolyta, and the Flash years later that she would learn this.

In one of the lives she ended up living, Donna was orphaned by her birth mother Dorothy Hinckley, a dying unwed teen who had given her up for adoption. After Donna's adoptive father Carl Stacey was killed in a work-related accident, her adoptive mother Fay Stacey gave her up for adoption again, unable to raise the toddler because of mounting expenses. Donna remembers being rescued from a fire by the goddess Rhea who, being one of the mythological Titans, brought her to New Chronus and raised her as one of twelve Titan Seeds, orphans from various planets who would have died if Rhea had not saved them. Each one was given the name of a place that worshipped the Titans, and Donna was given the last name of Troy in homage to the ancient city. She was returned to Earth at age thirteen, where her memories of New Chronus were erased until such a time that she would return and take her place among the Seeds as gods.

When Donna experienced having superhuman powers and abilities, she adopted the identity of Wonder Girl. Donna became one of the founding members of the Teen Titans, even suggesting the name of the group from a residual memory. She later returned to New Chronus and from that point on adopted the new identity of Troia.

She married Terry Long, a college professor, and soon became pregnant. A Teen Titans group from the future soon confronted her, claiming that her son would threaten the future as Lord Chaos. Donna voluntarily gave up her powers to prevent this.

She later requested for her powers to be returned but was denied. She then joined the Darkstars and rejoined the Teen Titans as a Darkstar.

Terry later divorced Donna citing that her superhero role put the family in danger and gained sole custody of their son. She turned to teammate Kyle Rayner for comfort, but left him after Terry, Robert and Jennifer (Terry's daughter from his first marriage) were killed in a tragic accident. The tragedy caused Dark Angel to appear and make Donna start anew with a totally different life, causing everyone but Hippolyta and Wally West to forget her existence as the Donna Troy who became Wonder Girl and Troia. Together with Diana of Paradise Island, Hippolyta and Wally helped restore the life of Donna Troy, breaking her out of the curse that Dark Angel had bound her to. She was then adopted as a daughter of Hippolyta.

An android named Indigo appeared, badly damaged and in need of repair. In her attempts to repair herself and call for aid from other androids, she caused a Superbot to go rogue during a meeting of the Teen Titans and Young Justice; Donna and Omen were killed during the attempts to stop it.

It was then Mudala who would obtain her DNA, and resurrect her on Paseth as her daughter in a plot to destroy Hippolyta, and Diana, and become Queen of Themyscira. It would be Jade who would restore Donna's true memories, and help her destroy all the clones Diana, Kara Zor-El, and Jade. In her last actions, she pushed Jade into the Trans Universe Portal before it exploded presuming that she, as well as Mudala, and her soldiers would be trapped in the Portal for eternity. But arriving on Earth (Prime), Donna appears as Troia, with no knowledge of Paseth or Mudala. Hippolyta keep these event from her in hopes she can resume being her daughter.

As a magical replicate of Diana, Donna possesses most of her powers. At various times she has lost and gained her powers, even abilities unique to her.

Superhuman Strength: With reasonably comparable strength to Wonder Woman Donna is able to lift in excess of 100 tons.

Superhuman Stamina: Donna can exert her maximum effort for several hours before tiring.

Superhuman Speed: Like Wonder Woman, Donna can move at supersonic speeds while on earth. She can move fast enough to not register in the normal peripheral range of humans and seemingly vanish and disappear at will. At this speed, her mind processes information at least on a subliminal level that she is aware of her surroundings. She is fast enough to deflect and catch bullets.

Flight: Donna Troy can also mystically fly through the atmosphere through sure act of will, enabling her to soar through the atmosphere at sub-orbital levels and travel across the planet. She can also carry others while flying. She is capable of leaving the earth of her own power and can hence reach speeds of escape velocity. She is immune from the effects of extreme height, such as dizziness and lightheaded.

Truth Sense: ability to coax the truth from a target or sense it.

Psychic Rapport with Diana: allows one to feel either what the other is experiencing or even share dreams.

Memory Projection: ability to project three dimensional images of a person's memories, provided the subject is a willing participant in the process.

Expert Combatant: Like all Amazons, Donna is well trained to fight with various weapons and in the martial arts, and often practices with a kind of staff which seems to be her personal weapon of choice.

Skilled Tactician: She is also a very capable leader and strategist.

Photography: Donna is a professional photographer.

Retrieved from "https://dcfanfiction.fandom.com/wiki/Donna_Troy_(Prime)?oldid=32985"
Community content is available under CC-BY-SA unless otherwise noted.