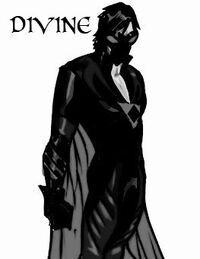 ORIGIN of DIVINE Kaylib was born on 1985 in a chicago hospital. Kaylib has a half brother Dillon aka The Arsenal born 1990. One day when kaylib was 13 years old an angel visited him and bestowed great abilitys apoun him that would emerge when he turns 18. When he was 18 his powers finaly emerged but on the same day he was attacked by a deamon named raphel. Raphel possesed kaylibs brother dillon and in the end when raphel had lost the battle to kaylib, he sent him back to the abyss leaving dillon nearly dead. Kaylib managed to heal his brother with a touch but also caused a change in dillon giving him super human abilities. Now nearly two years after the events with raphel dillon and kaylib have taken up superhero names and have started a group of heroes to protect chicago from darkness. Kaylib gained the name Divine when after he saved dillons life, dillons words to him were "i guess you think ure a angel huh,well that makes you divine to."

DEAD IN THE WATER

Bestowed by an Angel.

Retrieved from "https://dcfanfiction.fandom.com/wiki/Divine?oldid=5691"
Community content is available under CC-BY-SA unless otherwise noted.