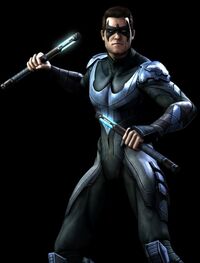 Universe
Earth-X0
Base Of Operations

Dick Grayson possesses the peak human strength of a man that has intense physical workouts at the height and weight of 5'10" 175 lbs. He is able to lift at least twice his own body weight; enabling to press lift 350 lbs, and he once supported nearly 1000 pounds of rubble.

Retrieved from "https://dcfanfiction.fandom.com/wiki/Dick_Grayson_(Earth-X0)?oldid=31266"
Community content is available under CC-BY-SA unless otherwise noted.