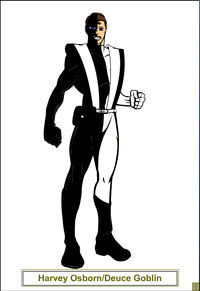 Harvey Osborn is the son of Jack and Jeanie Osborn. While Jeanie was pregnant she was murdered during a home robbery. At the hospital they managed to save Harvey. Jack became an alcoholic after Jeanie's death and would beat Harvey in a sadistic game involving his double sided coin. Harvey retaliated once but, got beaten even harder for it. Jack told Harvey that if he ever told anybody about it, it would get even worse. Harvey suppressed his anger for many years.

Eventually Jack and his former teacher Mendel Sartourius started OsCorp together and it eventually boomed, brining Jack and Harvey to high society. Jack stopped being abusive, but became completely ignorant of his son, deepening his emotional scars. Jack sent Harvey to private school where he met Peter Wayne, and they became great friends. Harvey was extremely jealous of Peter's loving relationship with his aunt and uncle.

Harvey went to high school with Peter. Harvey struggled with his grades. Peter tutored him, while he defended Peter from bullies. Something that hurt Harvey even more was of how pound Jack was for Peter. More than he was of his own son. Eventually Peter left New Gotham without a word, and Harvey was worried about what happened to his best friend. He later attended law school.

Harvey saw the corruption that surrounded him and decided to fight against it. He graduated from law school and ran for district attorney of New Gotham. He vowed to take down Carmine Fisk, also known as the Emperor. His father expressed his disdain in Harvey becoming the district attorney, saying that he should be active in OsCorp. Harvey said that he wanted to make a difference and then left. At the time of his campaign, Peter Wayne returned to New Gotham. Harvey visited him, happy to be reunited with his childhood friend.

One night Harvey found Jack working on recreating the World War II super soldier serum, and that he was leaving for a closet to get some needed materials. Harvey saw some other chemicals that he wasn't using at the desk, and finally saw an opportunity to get revenge for the abuse he faced. Harvey dumped the chemicals into the serum and then ran away. Because of what he did his father transformed into the Goblin. Because of what happened, Harvey was filled with great guilt.

End of the Campaign

In the end Harvey won the campaign, being elected New Gotham's district attorney. Harvey became a maverick district attorney, leading the campaign against organized crime, and worked with Spiderman and George Gordon at this task. He then began to date his long time crush Mary Jane Vale.

Crime bosses from all around New Gotham decided that they had to take Harvey out of the equation before he brought them all down. Carmine Fisk, the Emperor, and Frederick Maroni (a fusion of Sal Maroni and Frederick Foswell the Big Man), also known as Big Boss who had been at war for a long time even united. The others were Adrian Cobblepot a.k.a. the Raven (a fusion of Penguin and Vulture),Ventriloquist and Hammerhead (a fusion of Ventriloquist and Scarface and Hammerhead), Silver Mask (a fusion of Black Mask and Silvermane), Tony Russo (a fusion of Tony Zucco and Billy Russo) and Bruno Thorne (a fusion of Rupert Thorne and Bruno Costa). They decided to hire their former enemy the Goblin to take care of Harvey, to which he accepted.

Harvey was then engaged to Mary Jane. They were attending a fundraiser together for Harvey being held by Peter Wayne. The Goblin attacked and took Harvey away with him. Peter managed to put a tracer on Goblin's glider and ran to get his gear on.

The Goblin brought Harvey to an abandoned waterfront warehouse and threw him onto the ground and told him to leave New Gotham, or else he will be killed. Harvey fights back saying that he will never give into what criminals say. Goblin then berates Harvey saying that he knows that his father thinks Harvey was a disgrace, and not good enough. This got Harvey enraged and he charged at the Goblin, but the Goblin just knocked him back onto the ground and the Goblin told him of how he was his father. Spiderman then burst in and engaged the Goblin in battle. During the struggle the Goblin saw that Harvey was beginning to get up and threw a pumpkin bomb at Harvey, and it exploded in his face. "No," Spiderman shouted. A look of horror then crossed Goblin's face as Jack struggled to take control away from the Goblin saying, "No, he's my son!" During the battle supports had been damaged and the warehouse began to crumble. Jack managed to take control and held up the main support beam and shouted to Spiderman, "I never meant for any of this! Please get my son out of here! I don't know how long I can hold this." Spiderman nods and grabs Harvey, seeing that half of his face has been charred black. Spiderman then leapt and web swang out of the warehouse. After seeing they were gone the beam slipped and the warehouse fell on top of Jack.

Spiderman brought Harvey to a hospital and they helped him stay alive. Later George Gordon visited Harvey in the hospital. Harvey reflects on his life and says that he had always been two people, the shy, good natured Harvey, and that there was a darker side to him. One created because of his abuse and repressed anger. George then left, feeling sorry for what happened to Harvey.

That night Harvey broke out of the hospital and ran to the OsCorp lab and found that his father had begun making more of the remake of the super soldier serum, or goblin serum and used it on himself saying, "I'm going to even the playing field." His physical attributes were greatly enhanced. He then stole some goblin gear. He found in his father's desk his father's double sided coin and found that it had been scratched. Harvey took it, figuring that chance is the only thing that is fair. He was then the Deuce Goblin, and vowed vengeance against those who had done him wrong.

Goblin serum grants: Enhanced intelligence and superhuman physical attributes identical to that of the Goblin Goblin-themed weapons and paraphernalia. He used a perfected version of the formula, thus explaining how he doesn't got through a mass transformation like the Goblin.

Retrieved from "https://dcfanfiction.fandom.com/wiki/Deuce_Goblin?oldid=3979"
Community content is available under CC-BY-SA unless otherwise noted.