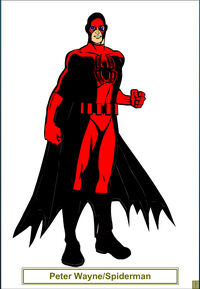 Peter was born to the wealthy Wayne family, his parents being Richard ( a fusion of Thomas Wayne and Richard Parker) and Mary Wayne (a fusion of Martha Wayne and Mary Parker). They lovingly raised him along with the butler and his wife, Alfred (a fusion of Alfred Pennyworth and Ben Parker) and Dr. Leslie Parker (a fusion of Leslie Thompkins and May Parker) who were like family. Richard ran Wayne Enterprises, but he and Mary were also agents of the spy group S.H.I.E.L.D., and would sometimes be gone for long periods of time making Bruce feel lonely. His best friend was Harvey Osborn (a fusion of Harvey Dent and Harry Osborn), the son of Jack Osborn (a fusion of Jack Napier and Norman Osborn) the CEO of OsCorp which was a competitor with Wayne Enterprises. They went to private school together.

Shortly after returning home from a mission Richard and Mary learn that they have to go on another very soon. Feeling guilty about having to leave Peter alone so much that they decided to take him to the movies. They go and as they leave they take a shortcut through an alley. In the alley they are confronted by a man with a gun who tells them to give them all money and jewelry. Richard does but the gunman sees that Mary is still wearing the new pearl necklace that Mary is wearing. Richard tries to deal with him but he is then shot dead. Mary screams and the gunman grabs the necklace, but it breaks into pieces. The gunman then runs away. Peter kneels by the bodies of his parents and his father says to Peter as his last words, "Don't be afraid." Peter then cries.

Sergeant George Gordon (a fusion of Jim Gordon and George Stacy) of the NGPD comforts Peter who is then sent home where Alfred and Leslie do their best to try and console Peter. Peter vowed that he would have vengeance for the death of his parents.

Peter became very introverted after the murder of his parents, and his only friend was Harvey. In high school Peter got into things like science and mathematics and was considered a geek. Harvey would protect Peter from bullies. Peter had a crush on fellow student Mary Jane Vale (a fusion of Vicki Vale and Mary Jane Watson), who Harvey also had feelings for.

Along Came a Spider

One day his class went on a field trip to Gotham State University (A fusion of Gotham University and Empire State University) where they witnessed a science exhibition where radiation is generated. Unknown to everybody a spider was caught in the radiation. While Peter was taking pictures for the school paper the spider managed to crawl onto his hand and bite him. Peter saw the spider crawl away and was horrified, since he had arachnophobia. He felt sick and ran outside. Peter wandered into the street and didn't see a car coming, but he sensed a coming danger and managed to jump out of the car's way just in time. When Peter opened his eyes he saw that he was sticking to the wall. Peter was amazed and climbed to the top of the building and accidentally crushed a metal pipe with his hand. Peter felt an new rush inside of himself and tried out his powers and was amazed at the great distances he could leap, how he could stick to walls, and his newfound strength. Peter figures that it must have been the spider.

At eighteen Peter decided to make good on his vow and left New Gotham to train to become the hero he hoped to become.

At the age of twenty-five Peter finally returned to New Gotham to learn that the criminal underworld is still ruling the city, the head being Carmine Fisk, also known as the Emperor (a fusion of Carmine Falcone and Kingpin). Peter returned to Wayne Manor and was lovingly received by Alfred and Leslie. He learned that Jack Osborn was planning to have a mass take over of Wayne Enterprises. Peter also learned that his childhood friend Harvey Osborn was running for District Attorney, with radical ideas of reform including taking Carmine Fisk out of power. Peter decided to fight against the take over of Wayne Enterprises. Meanwhile Peter begins to figure out what he's going to do to begin his war on crime.

Peter visits an old friend of Richard named Joseph Fox (a fusion of Lucius Fox and Joeseph Robertson) who used to work in the applied sciences division at Wayne Enterprises, but now works as a reporter at the newspaper the Gotham Bugle (a fusion of the Gotham Globe and Daily Bugle). He trusted Joseph and told him about his plans. Joeseph was the the best at coming up with weapons at Wayne Enterprises. Peter allows Joseph clearance into the Wayne Enterprises labs to start making the gear he plans to use in his war against crime.

While Joseph begins to make the gear Peter goes out dressed in a black outfit, including a ski mask to hid his face. He attacks a group of the Emperor's thugs who are robbing a warehouse. He puts a great effort but in the end gets brutally beaten, barely escaping with his life. Upon arriving back at Wayne Manor Peter reflects upon what happened with Alfred and says that everything went right except they weren't afraid of him. Peter thinks on the subject after Alfred goes to bed. Peter thinks for a very long time and then sees a spider crawling in the corner and then realized that to become the symbol of justice he wants to become he must use a symbol that would put fear into the hearts of criminals, and what better then the thing that scared him to death, the spider.

The First Appearance of Dark Spider

Soon afterwards Joseph gave Peter some gadgets to use including body armor, a cape to allow him to glide, and several gadgets that he put into a utility belt for Peter. Peter took the gear and then at Wayne Manor modified its appearance to be spider themed. He then put the suit on and fought a group of thugs that were robbing a jewelry store, and had the upper hand since they were terrified of him. As one thug tried to escape Peter grabs him and drags him to the edge of the rooftop they are on and the thug pleads for his life shouting, "Don't kill me!" "I'm not going to kill you," Peter says, "I want you to tell all your friends about me." "What are you," the thug shouts. Peter replies, "I'm the Dark Spider," and then throws the thug aside and jumps off of the roof. The thugs runs to and looks over the edge but can't see Dark Spider anywhere. The thugs were then all then arrested by Lieutenant George Gordon, who had been promoted since Peter left New Gotham. The police pursued Dark Spider, and he was barely able to escape.

The next day Peter visited Joseph and told about how well it went, except that he needs a mode of transportation. Joseph says that he started making web shooters after Peter had told him that he thought he got his powers from the spider. Peter tests them out that night, and web swings for the first time. He feels great excitement and joy.

War with the Mob

Dark Spider continues to battle against the forces of the city's mobsters, mainly those of Carmine Fisk, the Emperor, and the Big Boss, who is really Frederick Maroni. During a battle between their men, Spiderman intervenes by helping the cops fight against both sides. He aided George Grodon, Harvey Jameson (a fusion of Harvey Bullock and J. Jonah Jameson), Renee DeWolfe (a fusion of Renee Montoya and Jean DeWolfe), as well as several others. In the end Dark Spider and the law enforcers won, and Dark Spider found the location of their boss, the Emperor, who is Carmine Fisk. Dark Spider confronted Fisk and the two fought. The battle was heated but eventually Dark Spider was forced to flee. Fisk knew that they would meet again.

Peter manages to fend off Jack Osborn's takeover of Wayne Enterprises. Jack tells Peter that is was just business.

Later Peter is at a press conference at Wayne Tower he feels his spider sense tingles and sees a man that looks like a clown atop a glider. The clown fires a missile at Peter but he manages to jump out of the way. Peter then slips into Wayne Tower as the clown begins to attack the Wayne Enterprises executives that are there.

Peter calls Alfred who brings the Dark Spider gear around to the back of Wayne Tower where Peter puts it on and then swings towards the front of the building.

Also at the press conference is Peter's childhood crush Mary Jane Vale who is now a photojournalist. Goblin approaches her on his glider saying, "Hello beautiful." He then grabs her by the throat and she struggles to break free from his grip. Peter sees this and quickly swings down into the clown, making him fly off of his glider, and drop Mary Jane. Mary Jane sees Dark Spider and is amazed. The clown gets up and says, "Impressive, who may you be?" "I'm the Dark Spider," Dark Spider says solemnly. "I'll remember it," the clown says, "You can just call me the Goblin!" The Goblin then laughs and then presses something inside a bag he has and the glider flies back to him and he jumps on top of it and flies into the sky. Dark Spider then swings up and the two engage in a furious aerial battle. Dark Spider eventually damages the glider forcing the Goblin to flee. While flying away the Goblin shouts, "We'll meet again Dark Spider!" Dark Spider then swings away around the building and gets the suit off. Peter reenters the crowd while there is great commotion and walks towards Mary Jane who is slowly getting up from the ground and outreaches his hand and he pulls her up and sees her face. "Mary Jane," he exclaims. "Yes," Mary Jane says smiling, "We went to high school together." "Yeah," Peter says nodding his head. "So," Mary Jane says, "I'm a reporter now and it's my job to ask you about what you think about what happened." "I don't know what to say," Peter says, "Other than I don't think this is the last we'll see of the Goblin." "All right," Mary Jane says beginning to walk away, "See you around." "Bye," Peter says as Mary Jane walks away.

Haunting memories of the night his parents were murdered.

Retrieved from "https://dcfanfiction.fandom.com/wiki/Dark_Spider?oldid=5452"
Community content is available under CC-BY-SA unless otherwise noted.