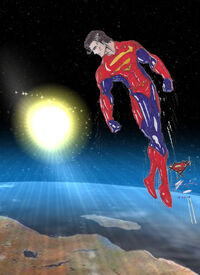 As the son of Clark Kent and Lois Lane, Cole Kent was the middle child of the three. He was encouraged by his father to become a superhero like him. He was given his old Kandor suit by his father. He went around town saving people calling himself Rising Son. After a while he found a suit that fit him, and he changed him name to Suprememan. He later started working at the Metropolis Planet, which he later found out was a marriagement of the Daily Planet and the Metropolis Star. The two still had their old builds but didn't change the name, so at the bottom of each name they put "part of the Metropolis Planet". During his free time he worked as a reporter, but other times he would go and save the world.

He can pick up something as large as a planet.

A space rock from his home planet that makes him weak.

Retrieved from "https://dcfanfiction.fandom.com/wiki/Cole_Kent_(Earth-01A)?oldid=33092"
Community content is available under CC-BY-SA unless otherwise noted.