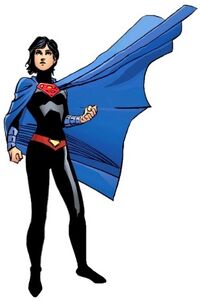 The young woman known as Cir-El is the daughter of Superman and Lois Lane! Created by Brainaic in the future to be the perfect weapon against Superman, Cir-El was a clone of Lois Lane with Superman's Kryptonian DNA spliced into her genetic code, Cir-El (given the human alias of Mia Kent...a nod to her lab designation as Project M-1A ) was a Trojan Horse. A nanotech virus had been planted in her bloodstream that when released would infect and assimilate the human race, and Brainaic sent her into the past to find her parents. Brainaic believed that Cir-El would be the only person Superman would never suspect, his child with Lois. Unfortunately for Brainiac, Cir-El was just as noble as her father and as fearless as her mother. When she learned of the virus she threw herself into a temporal vortex and attempted to erase herself from existence. But Superman loved his daughter and followed her into the vortex and managed to pull her back out. They discovered the vortex had disrupted the nanotech virus and Cir-El got to live with her parents and followed in her father's footsteps as a hero, the new Supergirl.

Due to her Kryptonian DNA, Cir-El is vulnerable to Kryptonite radiation, although she is more resistant to it than a full-blooded Kryptonian.

Retrieved from "https://dcfanfiction.fandom.com/wiki/Cir-El?oldid=33301"
Community content is available under CC-BY-SA unless otherwise noted.