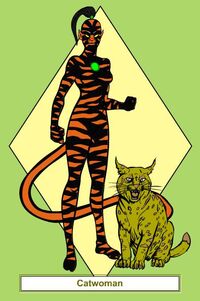 Tenephri-Amun lived during the time of Pharaoh Ramesses the Great during Egypt's 19th dynasty. She was a servant of the war goddess Bast and lived at her temple in Bubastis in Lower Egypt. Tenephri was the caretaker of the Temple of Bast and was responsible for administering to the needs of the priests as well as tending to the sacred cats that populated the temple. In 1260 BCE, the sorcerer, Hetepkheti Tefnakhte, aka, Khalis, a priest of Anubis, waged a fanatical campaign against the worshipers of Bast. Armed with three powerful tools of magic (the Amulet of Anubis, the Cloak of Destiny and the Helmet of Fate), Khalis nearly leveled the city of Bubastis to please the capricious whims of Anubis. Tenephri fought valiantly to defend her temple, and even after all of the priests had fled, she stood her ground, defiant to the end. Unfortunately, it was Khalis himself who ended Tenephri's life when he impaled her with a mystical energy spear. The temple, and all those who resided within it, were burned to the ground. Bast recognized Tenephri’s courageousness and was determined that Anubis would never take her guardian’s spirit. She fashioned her own amulet, an aegis of power, and imprinted Tenephri's spirit upon it. The amulet was left buried beneath the sands to mark the spot where Bast’s brave warrior fell.

The amulet remained buried for centuries until 1940 when archaeologist Carter Hall began excavating the valleys of old Lower Egypt. He discovered the amulet, and though he recognized its historical value, he had no idea of the true power that it held. The amulet became one of many display pieces at the Midway City Museum in Michigan and remained there for many years.

In recent years, the Midway City Museum donated a significant portion of its Egyptology displays to the Gotham Museum of Natural History in Gotham City. Notable museum patron, Bruce Wayne, arranged for the donation through his resources at the Wayne Foundation. Because the Wayne Foundation had provided the museum with a number of grants over the years, the staff were not opposed to letting Bruce keep the Amulet of Bast after he had taken a sudden interest in it. Like Carter Hall before him, Bruce Wayne had no concept of the power that was now in his possession.

Bruce Wayne gave the amulet as a gift to a woman named Selina Kyle. Selina Kyle, an historian specializing in cat lore, had been in a terrible accident and was in a coma. Bruce visited her hospital one evening and placed the amulet upon her breast. After he left the room, the amulet began to glow and the essence of Tenephri-Amun took possession of Selina Kyle. Rising from her hospital bed, Tenephri absorbed all of Selina's memories and declared that she would continue to serve as Bast's guardian under the name Catwoman. A woman of preternatural instinct, Tenephri was careful to imitate Selina Kyle's mannerisms to perfection, without giving away her true identity. She reconnected with Bruce Wayne, but recognized that there was more to Wayne than met the eye. Because of this, Tenephri began to distance herself from Wayne out of fear that he might learn the truth about her origins.

As the Catwoman, Tenephri-Amun committed herself towards destroying evil wherever she found it. However, her moral code was that of a 19th Dynasty warrior – one who had no compunctions over killing those whom she deemed undeserving of life. Invariably, Catwoman's actions brought her into conflict with Gotham's guardian – the Batman. The two have fought one another on several occasion, but Batman has yet to learn the truth about Catwoman's secret identity.

Although Catwoman primarily operates in Gotham City, she has on occasion, ventured to other lands and even once returned to Egypt where she encountered the animalistic fortune hunter Buddy Baker, aka, the Beast Man.

Teneprhi-Amun is actually a disembodied spirit whose only super-power is to take mental and physical possession over a host form. She cannot perform this deed on her own however, and it must be facilitated through a physical focus point such as the Amulet of Bast. While wearing the amulet, Catwoman's host body inherits the following abilities:

As the servant to a war goddess, Catwoman is proficient in various skills relating to hand-to-hand and mêlée combat.

Tenephri-Amun must never remove the Amulet of Bast or else her spiritual essence will be trapped inside the amulet and Selina Kyle will lapse back into a coma. Fortunately, the amulet serves as an Aegis, and cannot be removed from Catwoman's body through conventional means.

Retrieved from "https://dcfanfiction.fandom.com/wiki/Catwoman_(Brian_Kurtz)?oldid=3686"
Community content is available under CC-BY-SA unless otherwise noted.