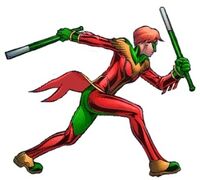 Ever since she was a small child, Carrie Kelley idolized her older cousin Barbara Gordon. When Carrie learned Barbara was Batgirl, Carrie decided to become her teenage sidekick. Carrie chose the codename Robin, basing her idenity and costume off of Batman's sidekick. At first Batgirl was reluctant to have her cousin join her in battle, but Carrie soon proved her worth.

When Barbara was crippled by the Joker, Carrie stepped up to fill her cousin's role as Gotham's protector and created a new costume and identity for herself as Redwing.